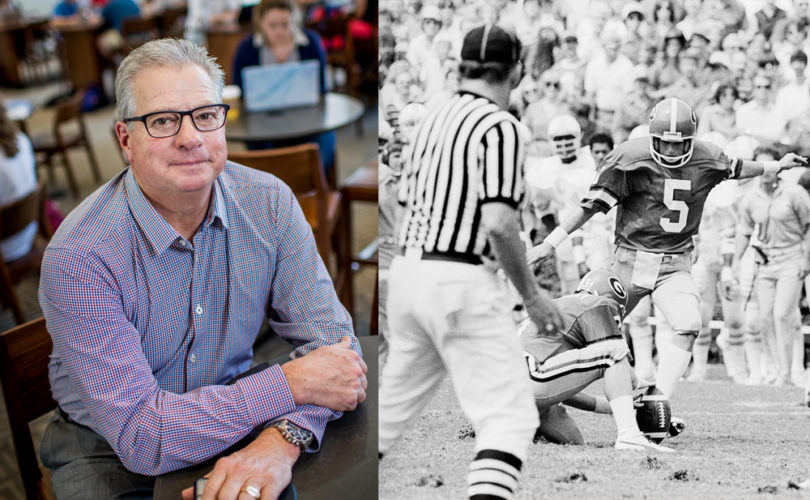 Former UGA kicker Kevin Butler AB '18 is in the College Football Hall of Fame and won a Super Bowl with the Chicago Bears, but his proudest moment may have come this past summer when he graduated from the Terry College of Business. (Photos by Jason Thrasher, left, and Walker Montgomery, right)

When Kevin Butler AB ’18 sets his mind to something, he gets it done.

He helped the University of Georgia football team make it to the national championship game—twice. Once as a player and once as a student assistant.

He left college early to master his craft of kicking before entering the NFL draft in 1985. He was chosen by the Chicago Bears and retired as the team’s all-time leading scorer. (He now ranks second.)

He even postponed his wedding because he believed his new team would make it to the Super Bowl. Turns out he was right: He earned a Super Bowl ring with the Bears, and he and his wife have been happily married for 32 years.

But it’s not just sports that reflect Butler’s dedication. In May, he graduated with a degree in economics from the Terry College of Business, completing his education 37 years after starting.

“I left UGA with only six credits to go, but I had to practice my trade,” he says. “I knew I was going to have a chance to be drafted, so I worked, worked, worked.”

But the idea of completing his degree stuck with him throughout his football career, his second career as an entrepreneur, and parenthood.

“The one thing that we always talked about once the kids got older, once they all get their education, was that dad would go back,” he says.

After his youngest daughter graduated college, he took the plunge. To complete the degree, he had to take three courses and write a thesis. “In that short time, I feel like I earned it,” he says.

But he wasn’t just getting back to the books. The retired NFL kicker returned to the Bulldog sideline as the student assistant to the kickers, working one-on-one with them to help with structure and technique.

He’s worked with the team for the last two seasons, including the historic win at the Rose Bowl and appearance at the National Championship Game.

No matter the outcome on the field, though, Butler’s true victory was completing his degree.

“I think it was important for me as a parent, as an alumnus, and as someone who represents this university,” he says. “Finishing my degree was a personal victory for me.”