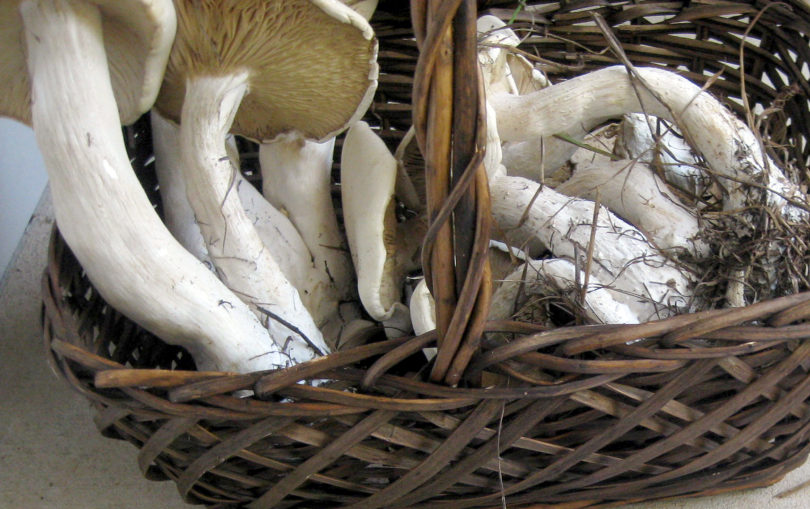 Athens, Ga. – With mushroom caps that can grow as large as trashcan lids, the gigantic fungus Macrocybe titans looks like something from outer space. And it may be popping up again soon in northeast Georgia.

University of Georgia mycologists in the College of Agricultural and Environmental Sciences found one specimen of this gigantic fungus—a species that produces the largest mushrooms in the Western Hemisphere—in the lawn of an abandoned Athens home last October.

Although the fungus is endemic to neighboring Florida, this was the first time the species had been confirmed in Georgia, said Marin Talbot Brewer, a UGA plant pathologist who mostly studies microscopic fungi that cause crop diseases.

As she waits for the giant mushroom to emerge again this fall, she’s hoping other Georgians will keep an eye out for it, too. Other sightings could help researchers like Brewer learn how the mushroom made its way to Georgia and help them track its spread.

Brewer wasn’t looking for giant mushrooms when she found the M. titans. She was sitting at her desk when she received an email from Athens-area mushroom enthusiast Kirk Edwards asking for her help in identifying his latest find.

The cream and buff caps were 8 to 12 inches in diameter with a dry exterior. From the photos it looked bizarre for this area of the country, Brewer said. When she saw it in person, though, it looked even stranger.

“It was huge,” she said. “It was just amazing and so much bigger than it looked in pictures.”

She asked Jeff Delong, her undergraduate research assistant at the time, to check the Athens mushroom’s DNA against the DNA of other known M. titans. He found a match.

The species was previously known as Tricholoma titans, but in 1998 it was renamed Macrocybe titans, which translates from Latin into “giant large head.”

While the caps of the M. titans can grow up to 3 feet in diameter, the fungus itself is larger still.

The bulk of any fungus’s body lives within its food source, which can be in a log or a tree, or in the case of M. titans, underground. Fungi feed by breaking down plant matter in the soil. The mushroom portion of the organism only serves to help the underground portion reproduce.

Brewer estimates that the fungal body of the M. titans mushrooms found in Athens probably stretches over a 20-foot diameter underground.

To this point M. titans specimens have only been found in subtropical and tropical regions of North, Central and South America, so it’s unclear how it made its way to north Georgia.

“They had some ornamental grasses in that yard, and many of those ornamentals are grown in Florida,” Brewer said. “So it probably came in on plant material is my best guess.”

The other option is that the mushroom may have been able to spread to Georgia on its own due to recent mild winters, she said.

While the M. titans is reported to be edible, Brewer cautions the public against eating wild mushrooms without a positive identification by an expert. Pets also should be kept away.

Different mushrooms affect different individuals and their pets differently, and all wild mushrooms should be positively identified before they become a snack or meal.