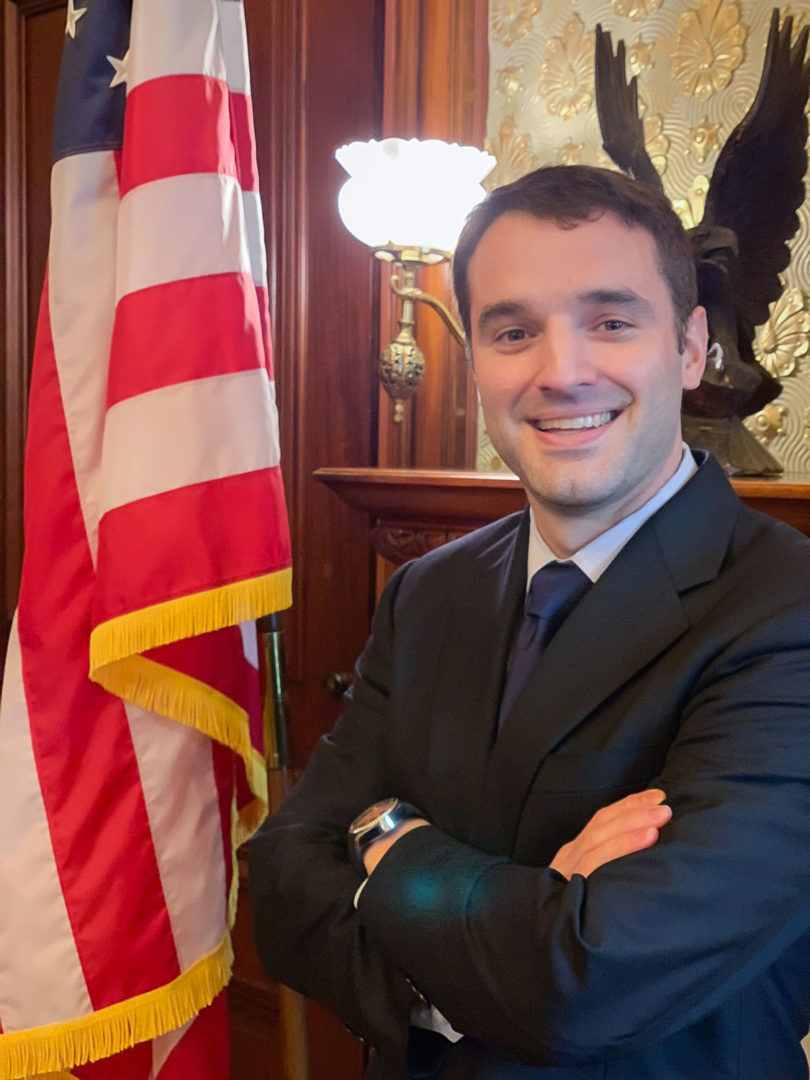 In August 2018, Latham Saddler BBA '05 joined the prestigious White House Fellowship Program. It is the latest challenge in a career that's filled with them.

In October, Latham Saddler received the Blue Key Young Alumnus Award at a banquet in Athens. The award honors Blue Key Honor Society members whose early- and mid-career contributions indicate a special level of service to the state and nation.

It’s one of the university’s highest alumni honors with regard to Saddler BBA ’05, and it barely scratches the surface of his accomplishments.

As a student, Saddler watched the terrorist attacks of 9/11 unfold from his TV in Russell Hall. The tragedy motivated him to serve. He considered transferring to West Point or the Naval Academy, but that would have required him to start his college studies over. Instead, he devoted himself to UGA student government. He was elected Student Government Association president as a sophomore and served as Interfraternity Council president as a junior.

“The more involved I became at the university, the more I fell in love with it,” Saddler says. “At a young age, UGA really helped shape me as a leader. I learned how to deal with different factions of people, people with different personalities and interests. Every day, I draw on lessons I learned at UGA.”

After graduating with a degree in economics, Saddler moved to New York City and entered the business world, but he was restless. He still wanted to serve his country. Knowing that the U.S. military needed additional experts in Middle Eastern studies, he began teaching himself Farsi. Saddler eventually went back to school, earned two master’s degrees, and became fluent in the language.

Then, in 2011, Saddler was ready to embark on his greatest challenge. He joined the Navy through Officer Candidate School and, at 28, entered SEAL Training as the oldest member of his class and upon graduation reported to the SEAL Teams. “It was a privilege simply to serve alongside SEALs, let alone lead them,” Saddler says.

During his eight years on active duty, Saddler deployed to Afghanistan, Iraq, and other posts in the Middle East. In 2017-2018, his final years in active service, Saddler was assigned to the National Security Council in Washington, and it was there that he met members of the 2017 class of White House fellows and saw the impact they were having on the nation.

The White House Fellowship is a nonpartisan program intended for mid-career leaders. They come to Washington to work at the highest levels of federal government for a year and then take that leadership experience back to their communities. It’s a program that’s for the best of the best, so Saddler decided to apply.

Just 14 fellows from across the nation were chosen for 2018-19, and Saddler was one of them. He was placed at the White House Office of Economic Initiatives and Entrepreneurship, and he’ll be there through the summer. It’s another challenge Saddler is excited to accept.

“I wanted to do the fellowship to get out of my comfort zone,” Saddler says. He has been working on a wide range of projects ranging from workforce development to prison reform—subjects he knew little about before the fellowship.

“It’s fascinating,” he says. When asked about his plans for after the fellowship, Saddler says, “I’ve got some time to figure out what I want to do next, but I’m really looking forward to the future.”