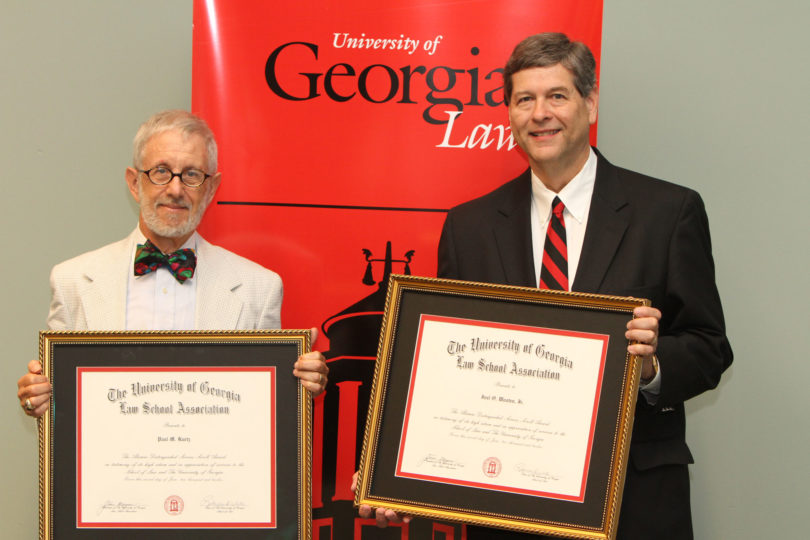 The awards were presented at the alumni breakfast held in conjunction with the State Bar of Georgia Annual Meeting. The award is the Law School Association’s highest honor and recognizes individuals for their exceptional service and dedication to the legal profession and the law school.

Kurtz’s award was presented to him by his former student and 1978 graduate N. Karen Deming, a partner at the Troutman Sanders law firm in Atlanta, who said, “The many positions (Kurtz) has served throughout his tenure at UGA are testaments to the respect, admiration and esteem with which he is held by his colleagues.”

Deming added that his true legacy lies in the impact he has had on his students. Kurtz “indeed did help us through the thicket of the law…and most definitely taught us by example that one’s dreams, one’s work, one’s hopes and ambitions and goals can be taken seriously without taking ourselves too seriously.”

Upon receiving the award, Kurtz thanked his family, colleagues and former students for their support and said he was “awed and honored” to be one of the few faculty members who have been given the service scroll award.

Kurtz joined the Georgia Law faculty in 1975 as an assistant professor and has taught family, criminal and constitutional law. Kurtz currently oversees academic programming and student life at the law school and is a J. Alton Hosch Professor. He will retire at the end of the 2012-2013 academic year.

He also is the co-author and author of several publications, serves as an associate editor and is a board of editors member for Family Law Quarterly, and currently represents Georgia in the National Conference of Commissioners on Uniform State Laws.

In the past, Kurtz has served on the board of the UGA Athletic Association and the University Council, was named a UGA Senior Foundation Fellow, chaired the Meigs Professorship Selection Committee and was a member of the initial Georgia Public Defender Standards Council, the governing body for the first statewide system of indigent criminal defense. The legislation establishing the system was enacted in 2003 in response to a report by a Georgia Supreme Court Blue Ribbon Commission on which Kurtz served as reporter.

“The greatest natural resource that we have (in Georgia) is the people of this state, and people like Joel Wooten are the ones who have built this state-the ones that continue to give back, the ones that make sure that everyone, regardless of their income or their station in life, has a lawyer,” Barnes said.

In Wooten’s acceptance, he said he was humbled by the honor and thankful for the “support of a network of family and friends” and for the “good fortune to be surrounded by wonderful mentors.”

“I have long had a deep appreciation for the University of Georgia and what it meant in shaping and molding my life. That is especially true of the law school; for it was there that I not only learned legal theory and critical thinking and found a noble profession but also made lifelong friends,” Wooten said. “We all should strive to make sure that our law school continues to be one of excellence.”

Wooten serves as managing partner of the Butler, Wooten & Fryhofer law firm and is a trial lawyer with considerable experience as lead counsel in civil litigation.

At Georgia Law, Wooten’s service includes being a member of both of the law school’s alumni boards as a present member of the Board of Visitors and a former member of the Law School Association Council. He also served as chair of the University System of Georgia Board of Regents (2004-2005 term) and was a member of its board from 1999-2006.

Additionally, Wooten has been honored by the state bar with its Tradition of Excellence Award, by the ABA with its National Constabar Leader of the Year Award and by GreenLaw with its Ogden Doremus Award for Excellence in Environmental Law. He also has been named one of Georgia Trend’s “100 Most Influential Georgians” and a Georgia Super Lawyer.