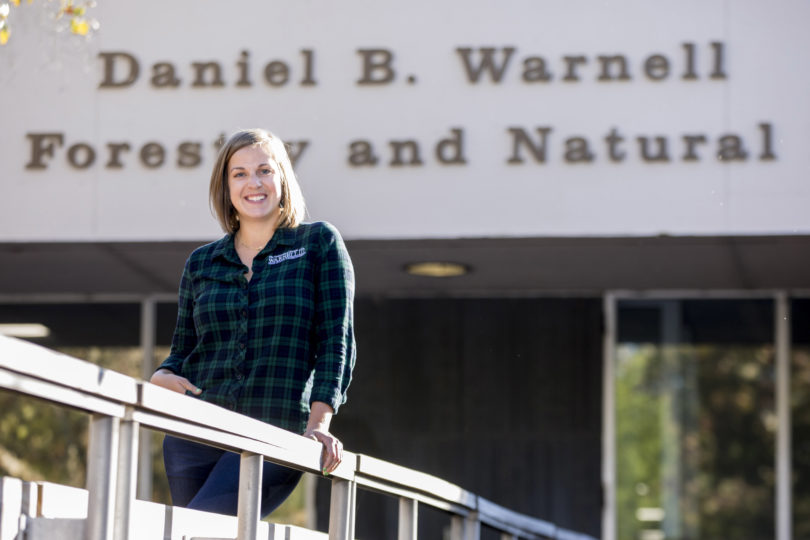 Katelyn Kivett advises first- and second-year students who are prospective majors in the Warnell School of Forestry and Natural Resources. (Photo by Dorothy Kozlowski)

As the student and career services coordinator at the Warnell School of Forestry and Natural Resources, Kivett uses her experiences and her interests to help her connect with students.

“My past led me to my present and helps me inform students,” she said. 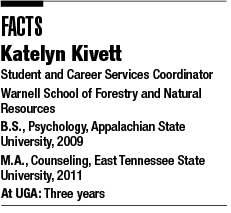 As an undergraduate, Kivett started as a communications major because she wanted to be a news broadcaster. She took a communications class and found it wasn’t for her. At the advice of her academic advisor, she took random classes that interested her before deciding to major in psychology.

She wanted to be a psychologist, but after taking an internship in psychology, she realized that the field also wasn’t for her.

After graduating, she worked in bereavement counseling before applying to UGA.

Her best friend worked at UGA’s Career Center and loved it, convincing Kivett to apply for a job in the center when a position opened. She decided to take a leap of faith and try something different. She worked in the Career Center for a year and a half before getting her position at Warnell.

As Warnell is a professional program, Kivett advises first- and second-year students who are intended majors.

“Warnell is a perfect fit for me, really,” she said. “I never imagined myself working in career services, although I certainly have my past experiences of why professional development and internships are so important to help you find your career. My initial attraction to Warnell was what the majors are: forestry, fisheries, wildlife, sustainability, outdoor recreation…they are all these ‘outdoorsy majors’ which fit with who I am as a person.”

Kivett is also a part-time instructor and co-teaches the course “Professional Development for Natural Resource Students,” which teaches students professional skills. She loves teaching, and the job has made her want to pursue her doctorate so she can become a full-time instructor.

In her spare time, Kivett enjoys outdoor activities, including ­hiking, camping, kayaking and running and spending time outside with her two dogs.

“Anytime that I can be outside is huge to me. That’s what feeds my soul,” she said. “That’s one of the things that I feel really helps me connect with the students in Warnell, is that those are the things that feed them too.”

Warnell is one of the smallest schools on campus with around 600 students. She advises approximately 200 of those students, but all of the undergraduate and graduate students come to her for career services. Her door is always open to talk with them.

“The students are what make UGA special for me. I’m constantly amazed by our students and by their intelligence,” she said. “They’re doing work as undergraduate students that is far beyond my expectations of a young person.”