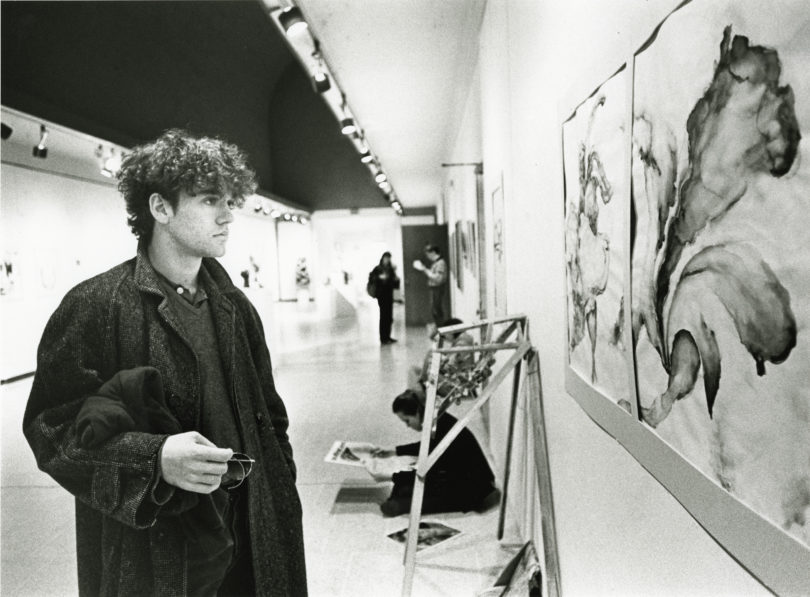 Michael Stipe from R.E.M. looks at art at the Lamar Dodd School of Art.

UGA is celebrating the local art and music scene as part of the Art Rocks Athens Festival with exhibitions at the Richard B. Russell Building Special Collections Libraries and the Georgia Museum of Art.

ARTifacts Rock Athens: Relics From the Athens Music Scene, 1975-1985, is on display at the special collections libraries through Dec. 31. Shapes That Talk to Me: The Athens Scene, 1975-85, will be on display at the Georgia Museum of Art from May 24 through Oct. 19. Both exhibitions are open free to the public.

Shapes That Talk to Me will include work by nearly a dozen artists, including Art Rosenbaum, Jack Kehoe, James Herbert, Richard Olsen, Judith McWillie and Robert Croker, all of whom taught at UGA’s Lamar Dodd School of Art, as well as Elaine de Kooning and Alice Neel, who served as visiting professors there.

Art Rocks Athens is a citywide festival organized by the Art Rock Athens Foundation. The nonprofit organization is dedicated to exploring and documenting the work of artists living and creating art in the city’s thriving art scene between 1975 and 1985.

The Art Rocks Athens schedule of events is available at http://artrocksathens.com/.