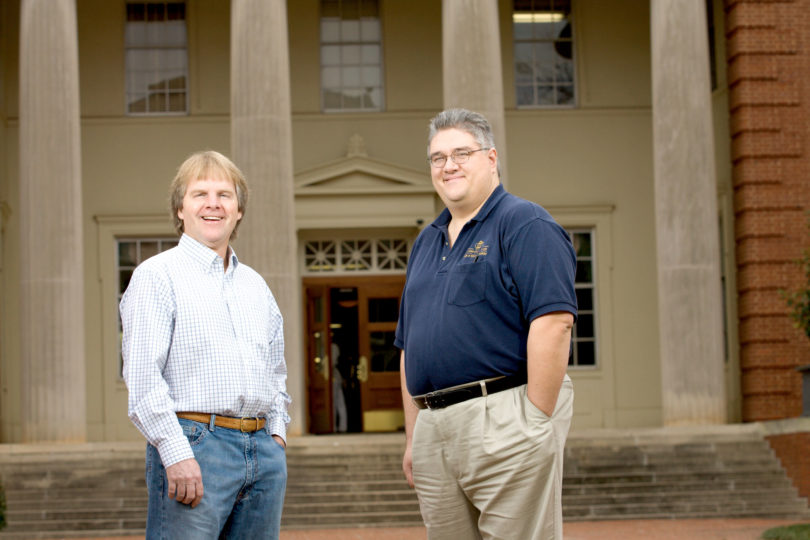 Jim Moore has been doing it for more than 20 years, steady and consistent. His colleague in the College of Veterinary Medicine, Chris Barker, started regularly about five years ago.

Both men call their gifts modest, but over time their contributions have continued to add up. Every month, through payroll deduction, they give back to UGA.

Moore says he considers the university more than just a place to work.

Moore, a research professor, and Barker, a veterinary technician, are among an expanding group of UGA faculty and staff donors. In March, as part of the Archway to Excellence Campaign, all UGA faculty and staff will be asked to consider a gift to the university. Current employees and retirees will all be given an opportunity to participate in the Archway to Excellence Campaign which is now 76 percent towards its $500 million goal.

Moore says UGA faculty and staff members shouldn’t be concerned about the size of their gifts to the university.

“Don’t worry if the amount you are considering might be small in comparison to what someone else is donating,” he says. “The key to giving is to be consistent and let it become a habit rather than a one-time choice.”

Barker says even though he considers his monthly donations to be small, it still helps.

“It doesn’t equal out to a whole lot, but it is a contribution,” he says.

Moore and Barker enjoy seeing their gifts in action at the veterinary medicine college.

“We are pretty cramped over here and eventually we would like a new hospital,” Barker says. “Being a part of making that happen has a lot to do with why I continue to give. It also gives me a sense of ownership here, that my contributions are helping the people I work with now and will help the people who will work here 20 years from now.

“Sometimes I even forget that the money is coming out of my check every month,” Barker also says. “But when you hear about things that are going on or improvements that are being made, then you start to realize that, hey, my money may have been a part of that.”

While Barker’s gifts are focused on the working environment for the staff at the vet college, Moore’s gifts are helping students.

“After one of my best friends and one of our vet college graduates passed away, I joined a large group of his friends in establishing a scholarship in his honor,” Moore says.

“Although my contributions to this scholarship fund have been modest, they have been consistent. As a result of the scholarship program in Steve Lee’s memory, each year I get to see one or two veterinary students get the chance to further their education through externships at equine practices in different parts of the world. Since this program started making awards, we’ve had students go all over the U.S., to Europe and Australia for these experiences. Steve would have loved it.”

Moore and Barker have continued to support UGA, even through the recent state budget cuts, and Barker says that some of his colleagues questioned why he would continue to support the university.

“A lot of people had comments because they didn’t get a raise one year or whatever, but the negative stuff you just can’t change,” Barker says. “I believe you can show others that your donations have made a difference, and that over time those small gifts really add up.”

“This is my career and. . . I know that there are many needs campus-wide that would benefit from the contributions of faculty and staff. If everyone does their part, it could potentially make a huge difference.”