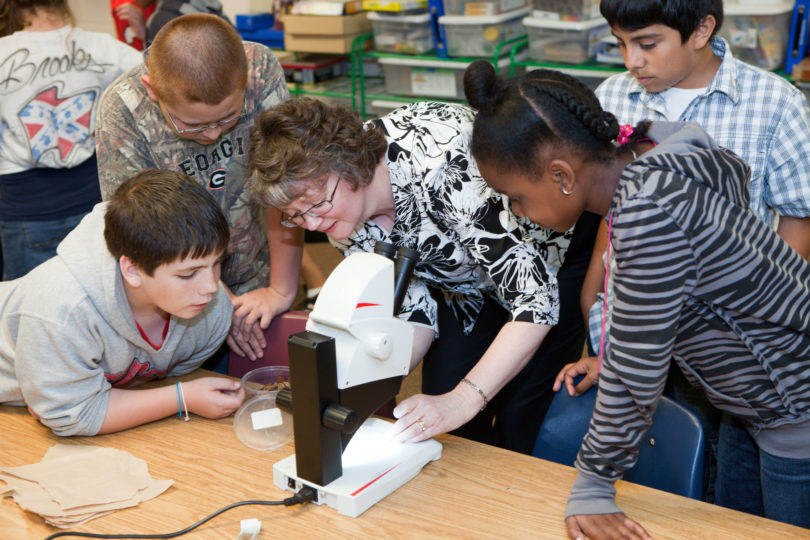 At the beginning of their lesson, Anna Glasgow Karls, associate professor and graduate coordinator in microbiology, shows the children slides of termites and the microorganisms that populate their guts.

The microbes inside termites are vital to the insects’ health, breaking down otherwise indigestible foods, she explains. They’re what turn a diet of wood into usable energy. Karls then describes how scientists are using the same microbes in termites’ guts to break down biomass and create energy that can be converted to ethanol.

“It’s relevant because people are always talking about green energy now and we have a lot of pine trees in Georgia,” she said. “And they’re cool. Kids love bugs.”

The demonstration is part of Furlough Lemon-Aide, a project organized by Ron Orlando, a researcher in the Complex Carbohydrate Research Center, that put 75 UGA instructors from varied disciplines into 15 local schools during the most recent furlough day.

But the microbiologists working at Benton also were practicing for a bigger stage. In October, they’re taking their termite demonstrations, along with other projects, to the first National Science and Engineering Fair in Washington, D.C. The fair is a cooperative attempt to get students interested in science and technology careers and paths of study.

“This is our first time doing it, so it’s like a practice run,” said David Samuel, a graduate student in microbiology. “It’s going to be fun.”

While that may not be how most students describe learning about protists and bacteria, Benton’s media center is a whirlwind of fifth-grade energy.

Shrieks of “Gross!” and “Cool!” ring out as the students peer into microscopes and squeeze the innards out of termites they pick out of wood samples.

Focusing a special microscope in on a particularly big blob, 11-year-old Sebastian Barrett exclaimed, “Look! I’ve got another one!” and gestured toward College of Veterinary Medicine professor Margie Lee to confirm his find.

But it wasn’t just the kids who couldn’t get enough.

“This is great for us,” said Cristina De Urioste, a fifth grade teacher at Benton. “We just finished a unit on microorganisms. In fact it’s one of the fifth grade standards they have to fulfill. They have to know it to move into sixth grade, so this is perfect for them.”

To learn more about the USA Science and Engineering Festival, visit www.usasciencefestival.org.