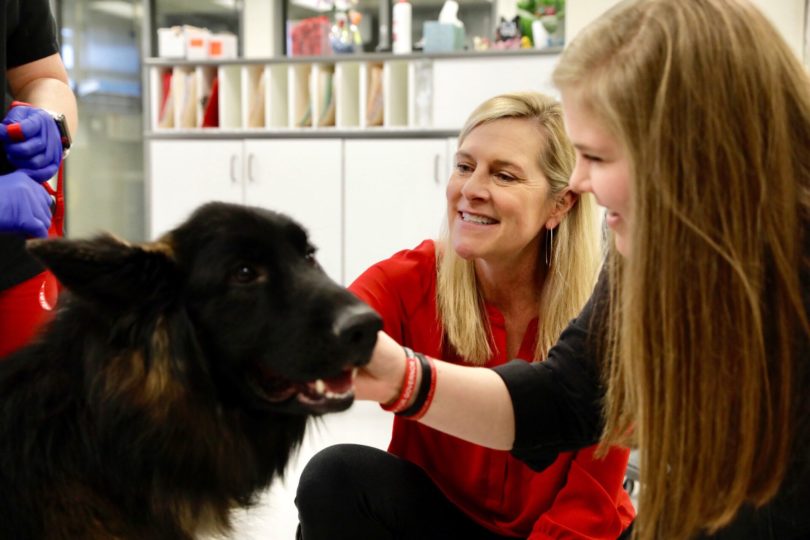 Georgia’s first lady Marty Kemp and her daughter Lucy pet Teddy, a German shepherd at UGA's College of Veterinary Medicine Teaching Hospital during a visit of the facilities on Monday. (Dorothy Kozlowski/UGA)

Georgia’s first lady Marty Kemp toured the Veterinary Teaching Hospital at the University of Georgia on Feb. 18, along with her daughter Lucy Kemp, UGA President Jere W. Morehead and several others.

Kemp, who has loved animals ever since getting her first horse, Flare, at a young age, is no stranger to the UGA College of Veterinary Medicine hospital. In 2006, she brought in a foal named Loula, who had reared up, fallen back and broken her tailbone. “It made her drag her left back leg,” recalled Kemp. “The vet came and said you need to get this foal to the vet school immediately or she’s going to die.” They brought her in and she was there for five or six weeks. Kemp would come and see her every day.

During her stay at the teaching hospital, her care team discovered that the foal had a blood disorder, one that would have killed her if she hadn’t been brought in for the tailbone. Today, Loula is alive and well on the Kemps’ farm.

Horses are her therapy, said Kemp. “I can tell them things and they won’t tell anyone,” she laughed. “I certainly wouldn’t have made it through politics without them. Anybody who loves horses knows exactly what I’m talking about. Whatever stress you have, they take care of it. That’s the beauty of them.”

Kemp has also brought two animals to zoological medicine: a bunny she rescued from the mouth of one of the family’s Labradors, and a duck that had died.

The tour led Kemp through the small animal teaching hospital, where she got to meet a puppy about to undergo surgery, and the zoological medicine area, where a giant anaconda was being treated. It also included the parts of the hospital used for diagnostic imaging, the food animal treatment center, and the equine performance arena, where horses are checked for lameness and other ailments. 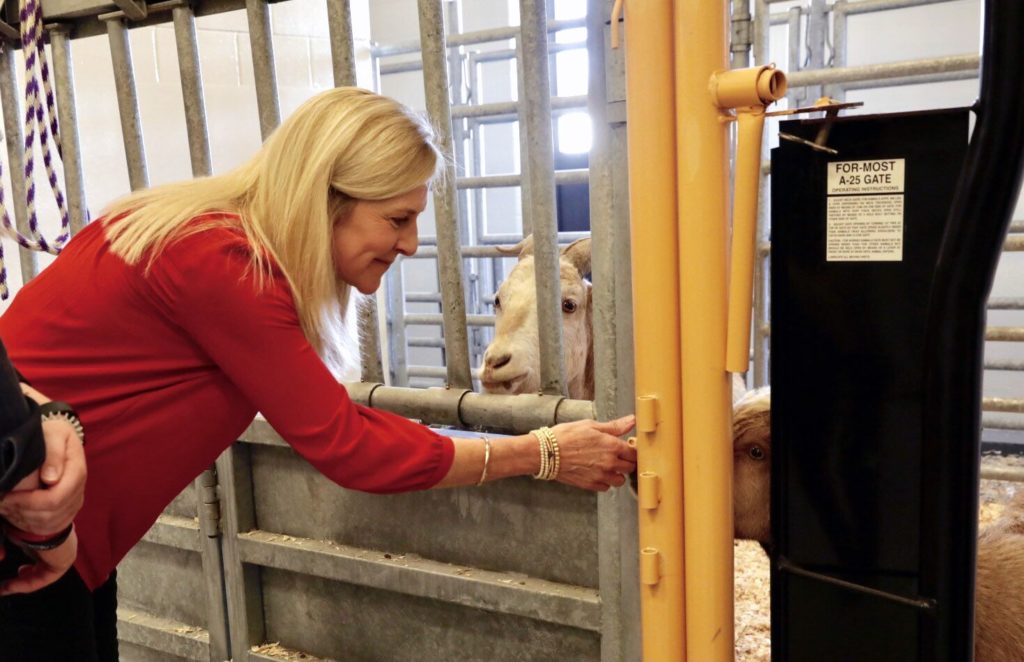 Kemp was impressed by how the teaching hospital has grown since her tenure as a student at UGA. “It’s ramped up about 100 times since I was here,” she said. “What’s going on here, is just awesome.”

Currently, the Kemps have three dogs, a barn cat, two sheep, a goat, four horses and two chickens. “I’ve been kind of low on animals recently, though Brian would say no, but we used to have a lot more.”

One her daughter Lucy recalled with particular fondness is a goat named Kenny Chesney. When the human Chesney was in town, Lucy and her mother saw the tour bus downtown and relayed the fact of their goat’s name to Chesney’s people. They asked her to bring the goat to them, so they did, and Chesney himself got off the tour bus to meet the goat and Lucy Kemp.

Lucy, a senior in high school and also a lover of animals, is interested in UGA’s veterinary medicine program.

Kemp is still in the process of working out what she wants to focus on during her tenure as first lady of Georgia, though she is certain animal welfare will play a role because it is a cause so dear to her heart.