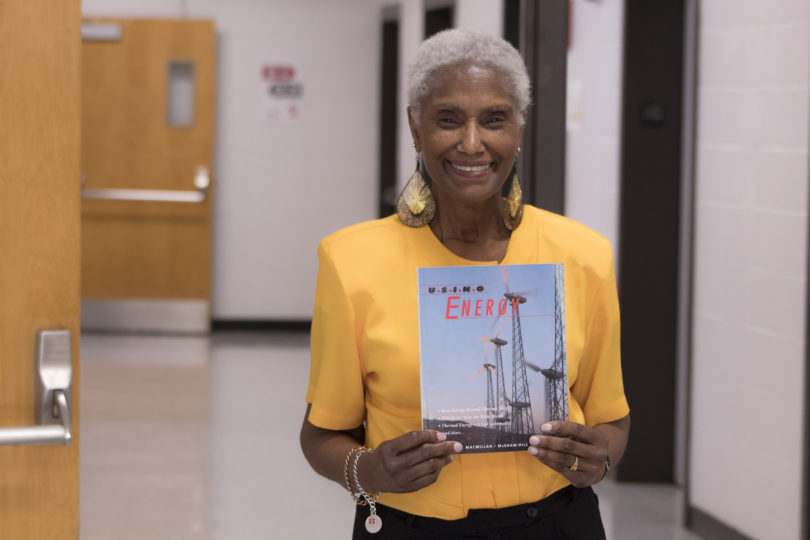 Mary Atwater holding a copy of her textbook.

When Mary Atwater’s science textbook about energy and electricity landed in the hands of William Kamkwamba, it changed his life.

“When he saw the picture of the windmill on the cover of the book, ‘Using Energy,’ he said, ‘If someone else built that, I can build one too,’” recalled Atwater, a professor of science education in the University of Georgia College of Education who co-wrote the eighth-grade book. “Can you imagine a person saying that?”

Kamkwamba went on to construct his own windmill using the book’s diagrams and experiments in order to help save his family from the famine that was gripping Malawi in 2002. The result of this happenstance—it was the only book donated to his village by MacMillan/McGraw-Hill through an international book donation program—not only powered several lightbulbs and radios in a country where most don’t have reliable electricity, but it also led to more discoveries and an award-winning book about his accomplishments.

Now, the story of Kamkwamba and his intrepid accomplishment is finding an even larger audience on Netflix, where it’s inspired the new film, “The Boy Who Harnessed the Wind.” The movie debuted on the streaming network in March and is based on the book of the same name by Kamkwamba and Bryan Mealer, which was released 10 years ago.

The movie stars Maxwell Simba as Kamkwamba and marks the directorial debut of Chiwetel Ejiofor, who also wrote the screenplay and plays the role of Kamkwamba’s father. It won the Alfred P. Sloan Feature Film Prize at this year’s Sundance Film Festival.

Atwater, who has followed the real-life story of Kamkwamba since the book’s release, noted the differences between the book and the movie—for example, the role of the boy’s mother was much more influential than what’s depicted in the film, and a few situations are highly dramatized compared with the true story.

But, she added, she was impressed to see a copy of the actual textbook used in the film.

Published as part of a multi-grade set of books, workbooks, companion DVDs and teacher editions, the sprawling set covered all aspects of the sciences. Atwater was one of many faculty members across the country who contributed expertise, although “Using Energy” was one in which she was heavily involved.

Originally, it wasn’t meant to be used by itself—it was part of a larger curriculum. But after the New York Times best-selling book about Kamkwamba was released, she said, that particular book received renewed interest.

“When William and Bryan’s book got that (best-seller) award, ‘Using Energy’ sold out around the world,” said Atwater. At that point the textbook series had long been out of print and any available copies were snapped up across the internet.

“When I met William, he told me that his copy got misplaced. He didn’t know what happened to it,” Atwater added. “I only had two complete copies of that science program, so I said, I’ll give you one of my copies. So, now I only have one copy of that book. You can’t find a copy of ‘Using Energy.’”

She had to explain the predicament to a father just recently. Inspired by the new film, he contacted Atwater about buying a copy for his son. “I said, ‘Well, I’m sorry, but I don’t know where you can find a copy,’” she said. “’You can’t get it on Amazon—you can’t get it anywhere. But I wish you well and I wish your son well.’”

“The Boy Who Harnessed the Wind” is rated PG and will appear in select movie theaters across the United States as part of the Netflix deal.