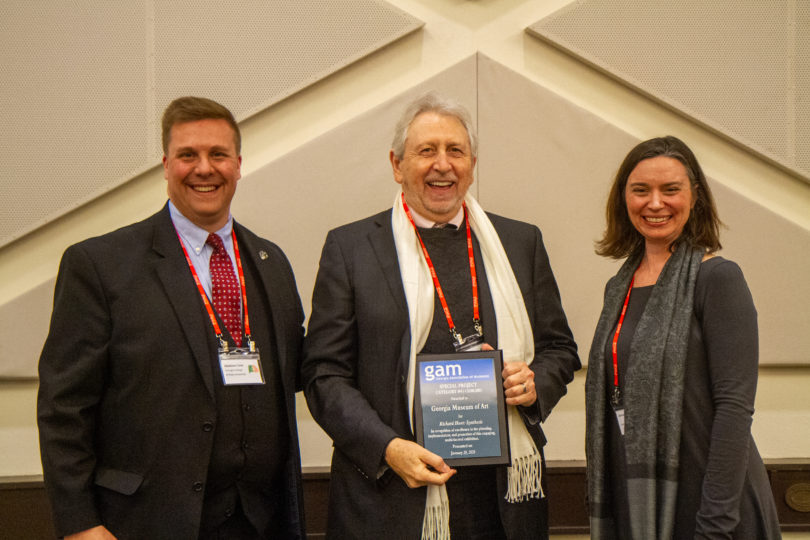 Matt Davis (left, president of the GAM board) and Christy Crisp (right, GAM board awards committee chair) present museum director William U. Eiland with the award for exhibition of the year. (Submitted photo)

This January, the Georgia Museum of Art at the University of Georgia received the award for exhibition of the year at the Georgia Association of Museums Conference for the exhibition “Richard Hunt: Synthesis.”

Hunt, born in 1935, is an African American sculptor whose career has spanned more 60 years so far. His art helped redefine public sculpture in the late 20th and early 21st century through his 130-plus public commissions in more than 24 states.

The exhibition featured both Hunt’s sculptures and his works on paper. It also highlighted formative moments and progressions in his artistic development. Welded and cast sculptures from the 1950s to the present were on display as well as models for public commissions dating back to the 1960s and lithographs and drawings that demonstrated Hunt’s complex sense of three-dimensional design.

In conjunction with the exhibition, museum staff created a wide array of public programming, including a program for toddlers and their caregivers to a Teen Studio, numerous public tours, a Family Day attended by hundreds of people aa part of UGA’s Spotlight on the Arts festival, a screening of the documentary “Richard Hunt: Sculptor” and a public conversation with the artist himself. The exhibition also served as the basis for the museum’s fifth-grade tour program, as part of Experience UGA, allowing all fifth-grade students in the Clarke County School District to tour it and participate in a hands-on sculpture project designed to facilitate STEAM learning.

The Georgia Association of Museums is a private, nonprofit museum and gallery association dedicated to serving and maintaining a diverse membership of museums across the state. It establishes a responsive network, serves as a resource base and promotes professionalism to uplift the Georgia museum community.