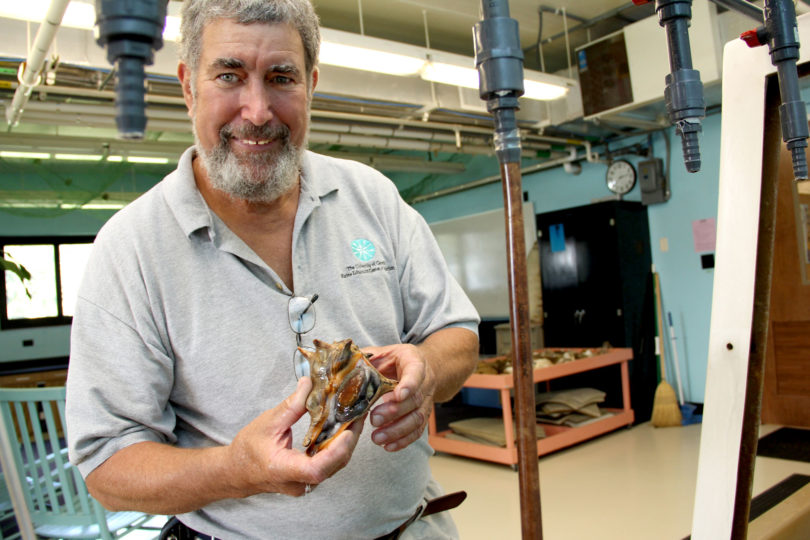 John “Crawfish” Crawford often skips morning traffic on the long stretch of road connecting Skidaway Island to the state of Georgia by jumping into his motor boat and skimming over the waters separating his home on the Isle of Hope from his job—as a naturalist and captain of the Sea Dawg or, more formally, a public service assistant—at UGA’s Marine Education Center and Aquarium.

Fish are a common sighting during those morning rides. And from the dock where he ties up and walks into work, so are dolphins, manatees and sea turtles, the Savannah native said. “Everything’s right here in our backyard.”

Spanish moss drips from the oak trees bordering the back of his office building, swaying in a muggy summer breeze that colors everything hotter. Crawford heads to the dock that makes up part of his office, looking over his shoulder and noting that the center opened in 1972. It houses Georgia’s first saltwater aquarium and serves as host to about 10,000 students each year.

He teaches most of them, “ages pre-K to gray,” he said. “It’s been a labor of love, and I’m very, very thankful to the University of Georgia for giving me a niche here to keep it going.”

His office at the Marine Education Center and Aquarium is stacked with reference books, maps, papers, jars, boots and art created by his daughter Lauren. On his desk, a gallon-sized glass jar of sand serves as a nest for
diamondback terrapin eggs. A sticky note marks the date they were laid: 4/17/12. The laying season this past spring was about 70 days long—a record over the usual 60 days.

Diamondback terrapin rescue—specifically from golf course sand traps—is another part of Crawford’s multi-faceted job, which mostly involves teaching and consulting. Every year, diamondback terrapins lay thousands of eggs in the sand traps that litter Skidaway Island. Over the past few years, volunteers have started collecting the eggs and moving them to nesting boxes on the edge of the golf courses.

The group started out by building boxes that allowed the tiny turtles to crawl out when they were big enough. But “the crows were getting them,” he said. So they’ve developed a better way: They hand release each turtle into the marsh.

“I grew up playing in the sand,” Crawford said. “Sometimes I forget that I get paid to do this.”

Crawford was 14 when he started his professional career as a naturalist. He was hired as the nature counselor for a Savannah-area Boy Scout camp—a job he held for three summers. It was the first time he was paid to be a naturalist, but not the first time he got his hands on nature. His family tells stories of him chasing them around with toads and frogs when he could hardly walk.

“I always knew what I wanted to do,” he said.

His love for creatures—his parents required him to care for each one—earned him his nickname.

When Crawford was in the third grade, an older patrol boy—so designated because he “had the authority and the badge,” Crawford said—hollered out the nickname that stuck.

“We were walking over from the school to the playground, and he said, ‘Oh, look, it’s Crawfish; he probably has a frog in his pocket,’ ” Crawford said. “I think that day I had a dead bat in my pocket I had found. He meant it as an insult, and I liked it. It just stuck after that.”

And Crawford now focuses his attention on a work area that extends from his office to a lab full of microscopes over winding marsh rivers to 8-mile Wassaw Island, “a pristine refuge that is part of our classroom.”

The center hosts students who come in groups of 50 to stay in the center’s dormitory and eat in its cafeteria. They are introduced to nature through classes, field trips, labs and the plankton they skim from the water next to the dock.

“It’s so much easier to teach students when we can take them out and sit them down in a marsh,” Crawford said. “I learn something new and see something exciting every time I go out with these kids.”