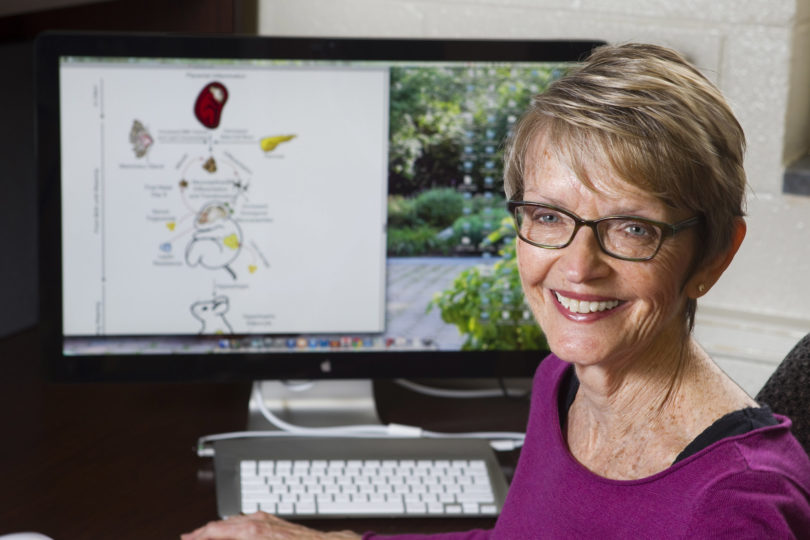 Feeding has long been recognized as an easy way to calm a crying baby. But now, experts say feeding a baby who isn’t hungry actually may be harmful in the long run.

Scientists now know that rapid weight gain during the first months of life is associated with obesity later in life, and Leann Birch, a UGA professor of nutrition, thinks parents’ ability to differentiate between hunger and other reasons for crying may affect this weight gain.

“Babies who are consistently fed when they’re crying may have trouble actually learning the difference between their own hunger and other distress cues,” said Birch, who spent 20 years studying childhood obesity before joining the UGA faculty in January.

Birch fills one of the first two faculty positions funded by UGA’s Obesity Initiative, a campus-wide endeavor to help Georgia address the obesity epidemic through research, education and outreach. Jian-Fu Chen, an assistant professor of genetics and biochemistry and molecular biology, holds the other position.

“The new faculty create new research activity as well as adding numbers to our Obesity Initiative teams,” said Clifton Baile, executive director of the Obesity Initiative, referring to teams of faculty members who collaborate in specific areas, such as maternal and childhood obesity.

Before coming to UGA, Birch studied the development of eating habits and food preferences at Pennsylvania State University, where she directed the Center for Childhood Obesity Research.

“She is a world-renowned expert in childhood obesity,” said Lynn Bailey, head of UGA’s foods and nutrition department, housed in the College of Family and Consumer Sciences. “Obesity during infancy and early childhood is very predictive of obesity in later life and related chronic disease.”

One of Birch’s research interests involves investigating whether teaching parents to recognize hunger in infants affects future eating habits and weight gain. Birch and colleagues at Penn State taught new mothers to try other methods of soothing a crying infant rather than feeding the baby. The study is ongoing, but a pilot study found that infants of parents given these tips had lower weight-for-length measurements and took fewer feedings at age 1. Birch hopes to continue to study interventions with mothers and infants at UGA.

“The work that we’ve done previously has been focused primarily on lower-risk groups,” said Birch, who is now the William P. “Bill” Flatt Childhood Obesity Professor in the foods and nutrition department. “We’re hoping there will be some opportunities here in Georgia to extend that work to children who are living in low-income, underserved families.”

The other recent hire funded by the Obesity Initiative, Chen plans to engage obesity at the molecular level. Chen also joined UGA in January with a joint appointment in the genetics department and the biochemistry and molecular biology department of the Franklin College of Arts and Sciences.

“Dr. Chen is focusing on epigenetics, one of the hottest areas of genetic research,” said Allen Moore, head of the genetics department.

Chen’s focus is an aspect of epigenetics involving the influence of small molecules called microRNAs and noncoding RNAs on gene expression. Chen became interested in obesity after a microRNA he studied later was found to affect whether mice developed obesity. Researchers found that mice with a loss of this microRNA, known as miR-208, were protected from obesity despite a high-fat diet.

As a postdoctoral researcher at the University of Colorado at Denver, Chen developed multiple mouse models to study the influence of certain RNA molecules on gene expression in brain development. Chen plans to use these models at UGA to further understand how these RNA influence neurogenesis, in the hypothalamus, a part of the brain associated with feeding behavior, energy balance and obesity.

In addition to Birch and Chen, Obesity Initiative funds have been used to create a third position in the area of obesity policy, which Baile hopes will be filled in the future.

Obesity-related faculty hires
Eight faculty with special interests in obesity were hired in 2014, in addition to the two positions funded by the Obesity Initiative. These faculty include:

College of Family and Consumer Sciences