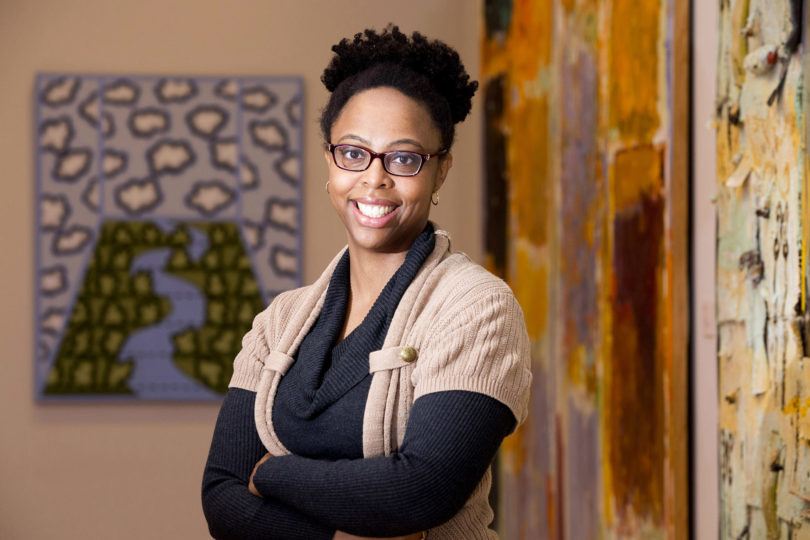 The diverse collection of African-American art at the Georgia Museum of Art doesn’t just add color to the gallery walls, it adds to the diversity of experience and perspectives offered at the museum, said Shawnya Harris, the Larry D. and Brenda A. Thompson Curator of African American and African Diasporic Art at the museum.

“The way we’re working on the reinstall plan is to display more artists in the Thompson Collection and put them in conversation with works by non-African-Americans,” Harris said.

A native of Bridgeport, Connecticut, ­Harris has been engaged in a conversation about African-American and African Diasporic arts throughout her career. It was a subject she discovered and became fascinated by as an undergraduate at Yale University.

“I didn’t grow up going to art museums very often, and I definitely didn’t go to museums looking to experience African-American culture,” she said.

Harris went to Yale intending to study electrical engineering. But she fell in love with her humanities classes and ultimately majored in African-American studies.

“In the past, I was sort of a specialist, but more or less a kind of catch-all (person), particularly on the administrative and teaching side,” she said.

But now at the Georgia Museum of Art, she’s excited to be able to focus on her specialty in African-American art.

Part of that work will be to help build the collection of African-American art. The Thompsons donated 100 works to the museum from their prominent collection of works by African-American artists and funded an endowment to support Harris’ position. Larry Thompson is a faculty member at the School of Law, and Brenda Thompson is chair-elect of the art museum’s Board of Advisors.

Harris will expand the African-American art collection by looking for new and undiscovered art to feature. She also will begin documenting the existing works in the Thompson collection. Harris will dig into the work and lives of the artists in the collection to provide better understanding of who they were and what they were trying to create. That research will offer opportunities for collaboration across disciplines, but it will paint a more complete and colorful picture of what is known about American art.

“There aren’t a lot of African-American artists who show up in major survey texts,” Harris said. “So we’ve got a role in documenting those artists, making it available—not just here—but for people who are interested beyond Georgia.”