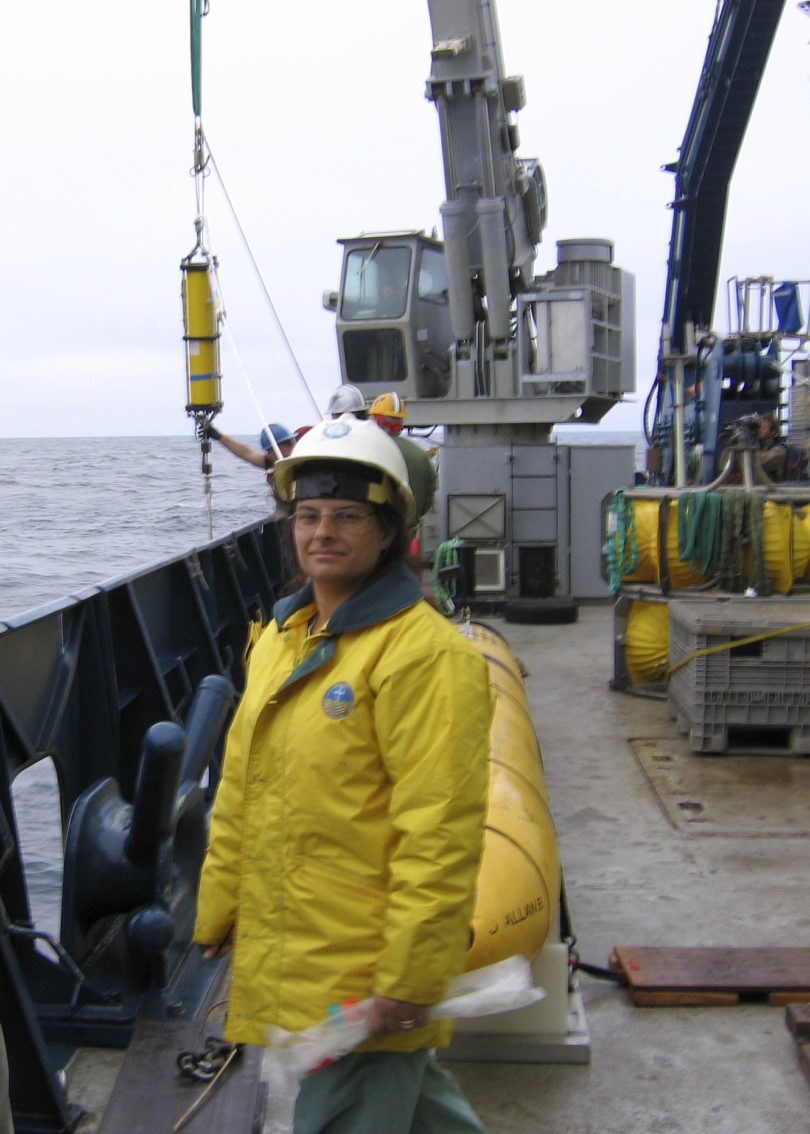 Daniela Di Iorio watches while her acoustic instrumentation is deployed off the research vessel Atlantis.

Athens, Ga. – Deep-sea hydrothermal plumes—waters nearly two miles down in the ocean—are home to processes that effect life across the planet. However, high pressure and water temperatures that exceed 300 degrees Celsius have made research on the plumes very difficult.

With a new grant from the National Science Foundation, a University of Georgia researcher will develop instrumentation to collect data at these depths. The study will help provide long-term data for understanding the impact of ocean phenomena—such as tides and storms—and geologic events from earthquakes on deep-sea ecosystem development.

Long-term data is needed for researchers to find connections between different processes.

Daniela Di Iorio, an associate professor in the Franklin College of Arts and Sciences department of marine sciences, was the first to gather long-term data of deep-sea plumes when she monitored plumes for six weeks using her novel acoustic instrumentation in a previous study. With newly designed instrumentation developed through NSF support, Di Iorio will begin a three-year project that will provide researchers with a constant feed monitoring deep-sea development.

The $818,395 grant will enable Di Iorio to connect to a deep-sea fiber optic cable at the Ocean Networks Canada NEPTUNE cabled observatory, allowing for 24-hour surveillance from an office in Georgia.

As the oceanic crust moves, cracks and cools, ocean water above it seeps down and is heated by the magma below. This high-temperature ocean water goes through chemical reactions, causing minerals and metal sulfides to be released back into the ocean in plumes—resembling smoke—being emitted from the ocean floor.

These plumes help form new life in the deep sea when bacteria use hydrogen sulfide, present in high levels due to chemical reactions, to create energy through the process known as chemosynthesis.

Using acoustics, Di Iorio’s instrumentation measures the amount of heat being released into the ocean by collecting data on the temperature and speed of the plume.

“These acoustic methods transmit sound through the plume,” she said. “We transmit and listen to sound on a receiver on the other side of the plume. When sound travels through this turbulent medium, it leaves its signature, and we see changes in the time of arrival and the intensity of the sound.

“When we extend the time measurement in this study, we can start looking at earthquake processes. How do seismic events affect the plume? It could shut off existing hydrothermal plumes, create new ones at new locations or make mega plumes.”

Mega plumes occur when an enormous volume of hydrothermal fluid is released into the ocean in a relatively short time due to a major crack in the ocean crust. They have rarely been observed in real time.