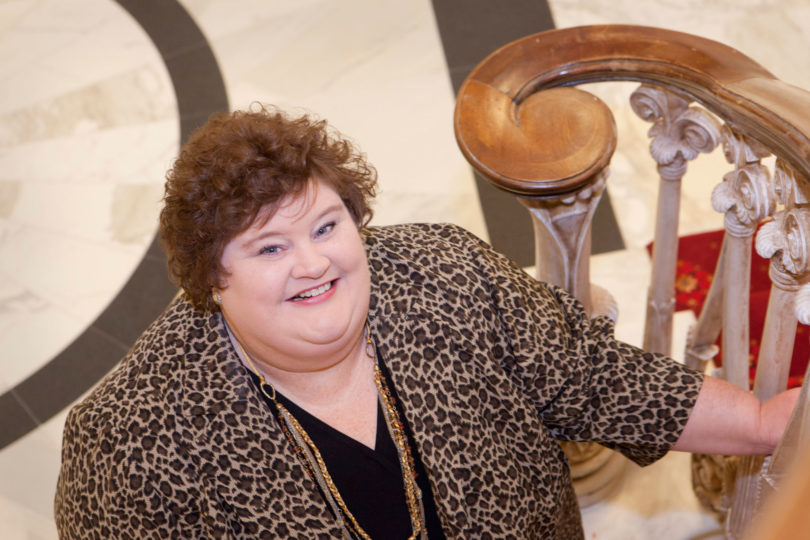 Phyllis Cooke has been at the School of Law for 20 years. As director of annual giving

For more than a decade Phyllis Cooke has diligently raised money for the School of Law’s annual fund. She’s become so iconic—her name so synonymous with the fundraising effort—that some alumni call it the “Phyllis Fund.”

“Make sure this goes to the Phyllis Fund,” donors will say when handing over a check. And that way, they know their donation is very likely going towards student scholarships as 70 percent of money in that fund is designated for that purpose.

In the last decade alone, Cooke, who is director of annual giving at the law school, has raised more than $6.7 million, which have  funded almost $5 million in law school student scholarships.

And the more that scholarships are awarded, the more Cooke hopes that new lawyers will take on public interest cases and give back to their communities.
“Phyllis really makes you feel proud about where you went to school and what you’ve done,” said M.J. Blakely, a 2006 law school alumnus and trial lawyer in Atlanta. “She asks me about my family, really reaches out. Not everyone does that.”

Blakely, who knows Cooke from working on a committee with her when he was a law student, said he tries to make time to chat with her whenever he’s in Athens.

Cooke sees it as her job to know all the graduates—to ask about their children and even get them last-minute tickets to the homecoming barbecue.

“I attend a lot of funerals, I kiss a lot of babies. I’m like a politician,” Cooke said with a laugh. “And like a politician, at the end of the year, you’ve done all the asking you can do, you just have to wait until the money comes in.”

Despite the recession, the money has come in. Year after year, the law school has broken fundraising records.

Cooke calls this “dialing for dollars” and said it’s a little like a pledge drive.

But in the latest effort, the school raised almost $785,000 and exceeded its goal by approximately $35,000—which means more money for student scholarships.

She builds relationships, visits alumni and asks them about what they’re working on.

“Stepping in to someone’s office and taking the time to look around to see what books, artwork and family pictures they have is important,” she said. “That tells you where their heart lies.”

“With ‘friend-raising’ and development, you have to start the conversation and then you shut up and let them talk,” she said.

Inevitably, the alumni begin to recall how the School of Law set them in the right professional direction.

“They’ll tell you about their favorite professor, tell you stories about law school,” Cooke said. “Attorneys like to tell stories.”

And breaking these fundraising records at the law school is part hard work and part thinking outside the box. It’s creating new programs and changing with the times.

“Thirty years ago, it was just go and visit people and ask them for a check. Go on 10 visits a month,” Cooke said. “That’s not enough. You’ve got to make that many visits in a week now.”

To get new graduates to give, Cooke has started a program encouraging them to gradually give more every year for their first five years out of law school—and in turn getting their name on a plaque in the law school’s student break room. She’s also started a corporate challenge, where firms compete for a trophy and 100 percent alumni giving.

“I believe fundraising will always be one of the most important functions in any state-supported university,” Cooke said. “It is all about the students. They may never realize what impact I have made on their busy student lives–but I know and I receive a sense of satisfaction when they succeed as graduates.”

She came to the law school 20 years ago, with a background in marketing, while she was a single mom trying to raise two girls. Since then, both her daughters have earned multiple degrees from UGA. Her oldest, Christy Westmoreland Epps, has earned bachelor’s and master’s degrees from UGA and will have her doctorate this December. Her youngest, Dana Westmoreland Griffin, has a bachelor’s and a master’s from UGA.