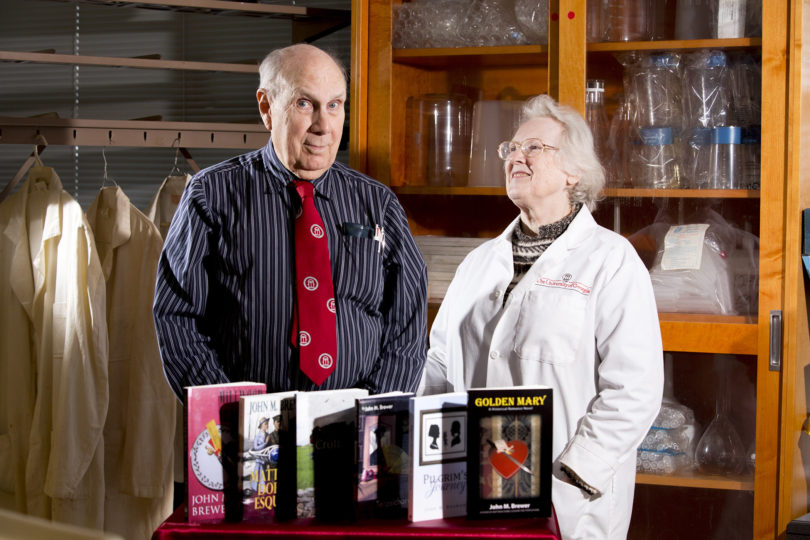 Several years ago, biochemistry and molecular biology professor John M. Brewer got some advice from his doctor.

Brewer, who will celebrate 50 years at UGA in September, was told to enjoy himself and start doing the things he always wanted to do.

“He (the doctor) was talking about traveling. I hate travel,” said Brewer, sardonic but playful.

Instead, he took up a hobby that accommodated one of his favorite pastimes—letting his mind wander. Brewer started writing historical romance novels.

Since then, he has self-published six novels, each with elements of conflict, action and romance. His books have been set during the American Revolution, World War I and World War II.

His most recent novel, Golden Mary, takes place during the reign of Henry VIII when the king began the suppression of monasteries. In Brewer’s words, the plot includes “a lot of sword fighting, lust and good things like that.”

The writing was just an extension of what Brewer has done since he was a child: thinking up fantastical stories in his head.

Following his interest in science, Brewer took on a career in biochemistry—but the fanciful stories continue to swirl.

A few years ago, his mentor from Johns Hopkins University, where he earned his doctorate, learned about his writing.

“He couldn’t get over the fact that I was writing fiction and wondered if I had gotten this from writing grant proposals,” Brewer said with a grin. “I thought that was a low blow.”

Brewer’s wife, Mary Sue, a research technician in UGA’s College of Family and Consumer Sciences, aids with production of the books. She has helped convert her husband’s handwritten, cursive manuscripts into text. She also designed five of the six book covers.

With retirement nearing in December and with that a decrease in lab research, the books keep coming. Brewer’s current project—a seventh novel titled Quest due out in December—is set in the present and is based on a real-life mystery of human remains found in a Nevada cave in 1900.

Just like in the lab, Brewer does extensive research before writing. That’s to make the historical setting accurate.

“This is historical fiction, not historical fantasy,” he said. “I do my homework. I want to get things right.”

According to Brewer, everything that happens in his stories is “possible, plausible or actually happened.”

The story “tells itself,” according to Brewer, and he observes and records, just like he would in the lab.