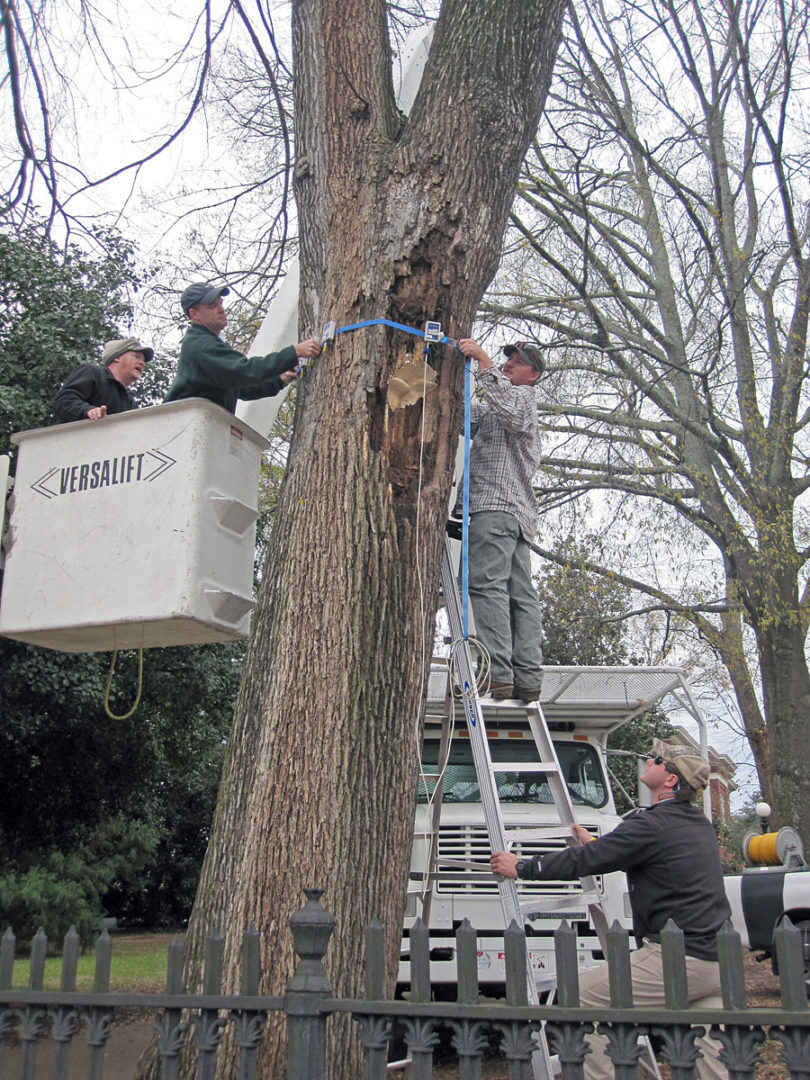 Out on a limb: Grounds department tends to health of North Campus elm

Even trees get health check-ups—especially the stately oaks, elms and maples that adorn North Campus. And the recent weather extremes—drought, excessive rainfall, snow and ice—make those check-ups even more important.

The university has a three-man tree crew designated to monitor and maintain campus trees. The job includes pruning and climbing trees, but also removing a dead or hazardous tree.

Tree removal isn’t always the best option, so sometimes even the campus tree surgeons need to call for a second opinion.

That’s just what happened when a winged elm that’s inches away from the wrought iron fence on North Campus developed a large area of decay on its trunk.

“Two years ago the tree was fine,” said Michael Orr, landscape manager in grounds maintenance, “but this past spring we noticed some soft spots and decay.”

The century-old tree stands over the bustling Broad Street sidewalk and a few parking spots. It’s not far from the Arch, and since campus safety is a priority for the grounds department, the prognosis wasn’t looking good.

“Our primary duty is to provide a safe environment,” said Orr. “If it becomes a hazard, we will take it down immediately.”

He explained that if the tree, or one of its limbs, fell on a pedestrian, car or even the historic fence, it could cause serious damage. He said that the tree surgeons would rather be proactive in preventing those scenarios, but that they would do everything they could to salvage it.

Because of the prominence of the tree, Chris Hastings, a board-certified master arborist, came in from Alpharetta and used the latest technology to perform a sonic scan X-ray on the tree to see if it was hollow or healthy.

Hastings inserted 10 nails into the tree, each with an attached sensor. He then used an electric hammer to knock on the tree and send sound waves inside it. His equipment used the sound waves and their travel through the tree to get a picture of what the tree looked like inside.

The tree crew took several readings at the different heights. They even brought in a 60-foot bucket truck to measure the 100-foot tree at some of its loftier heights.

In the end, it was determined that the tree was healthy enough that it didn’t need to be removed, but it would require the human equivalent of surgery.

In January, the tree crew—Dale Carey, Josh Crump and Mark Artelt—pruned the tree and removed some of its lower branches. They installed a steel eye-bolt cable in the tree to provide support where a spot in the trunk had weakened due to decay.

The tree will still be checked once a month to make sure the decay does not get worse.

All of the 6,000 trees in the campus arboretum are monitored and maintained by the tree crew in the Physical Plant’s grounds department. Besides climbing and pruning trees, the crew also regularly monitor trees for signs of stress due to drought, insects and disease, and for stress from heavy pedestrian traffic and construction activity— all of which can adversely affect tree health.

The grounds department is also working on installing new trees around campus. Two hundred oaks will be planted around campus—beginning with South Campus and moving north—and over the next several years 800-1,000 trees are scheduled to be planted.