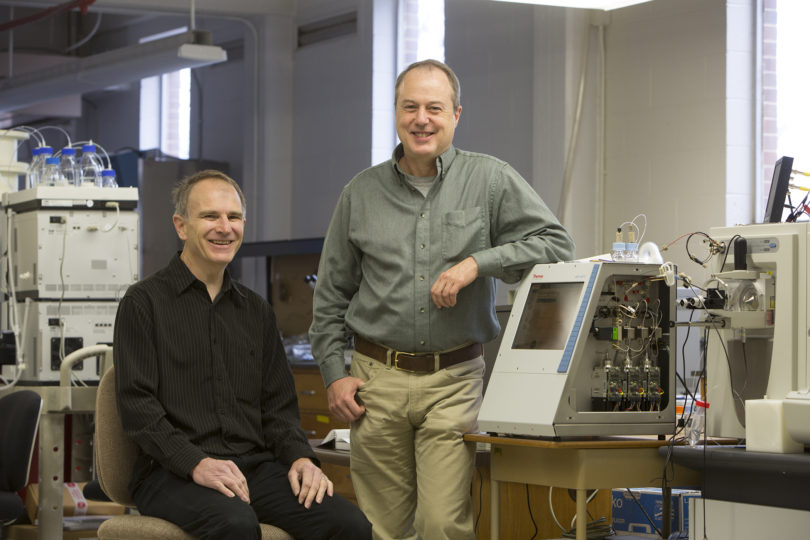 Athens, Ga. – Scientists at the University of Georgia are using lessons learned from a parasitic wasp to gain insights into how mosquito-borne diseases, like malaria and the Zika virus, evade detection by their hosts’ immune systems, enabling them infect other animals, including humans.

In a paper published recently in the journal PLOS ONE, researchers Kevin Clark and Dennis Phillips, who is director of UGA’s Proteomics and Mass Spectrometry (PAMS) Core Facility, used software to uncover a network of proteins that work together to form an immune complex in mosquitoes and caterpillars.

This complex seeks out disease-causing pathogens and then recruits enzymes and proteins to the surface of a pathogen to destroy it. But some disease-causing agents are able to dodge an insect’s immune response, enabling them to multiply inside their host and in some cases go on to infect humans.

To better understand this process, Phillips and Clark studied a parasitic wasp native to Australia that deposits eggs inside caterpillars along with a virus that inhibits the immune system. They showed that a specific protein from that virus disrupts formation of the immune complex in the caterpillar Bombyx mori, commonly known as the silkworm.

“Knowledge of how the wasp uses this protein to evade detection by the caterpillar will greatly increase our ability to understand how other pathogens are able to evade the immune systems of disease-transmitting insects such as mosquitoes,” said paper co-author Kevin Clark, from UGA’s department of food science and technology.

One of the crucial processes that insects such as silkworms and mosquitoes use to defend themselves from disease-causing viruses or parasites is melanin formation, which is similar to the process that occurs when sun exposure causes people’s skin to tan. In insects, melanin is used to coat the surface of a pathogen, but until now it was not known how this occurred.

“Most people wouldn’t even think insects have immune systems, but they actually have very sophisticated immune systems,” Clark said. “Melanization is just one aspect of a broader array of components insects use to fight pathogens.”

Clark and Phillips not only showed that the immune complex contains the enzymes used to produce melanin at a pathogen’s surface but also discovered an enzyme that signals the activation of hemocytes. Hemocytes, the insect equivalent of human white blood cells, engulf invading bacteria and viruses and attack parasites. Additionally, the researchers discovered blood-clotting proteins in the insect immune complex that help to trap pathogens.

“The insect doesn’t want these immune responses happening everywhere in the body because it would kill it,” Clark said. “You want certain immune responses only where you have the problem. Pattern recognition receptors found in the immune complex ensure that the responses occur right where they are needed.”

Describing their work as “fundamental research,” Clark said the paper’s discoveries are key stepping stones to tackling how other disease-causing pathogens evade insects’ immune systems and are transferred to humans.

The study was published in Plos One and is available at http://journals.plos.org/plosone/article/authors?id=10.1371/journal.pone.0171447. Funding for the project was provided by the National Science Foundation (IOS-1121006) and National Institutes of Health 1S10RR1028859.