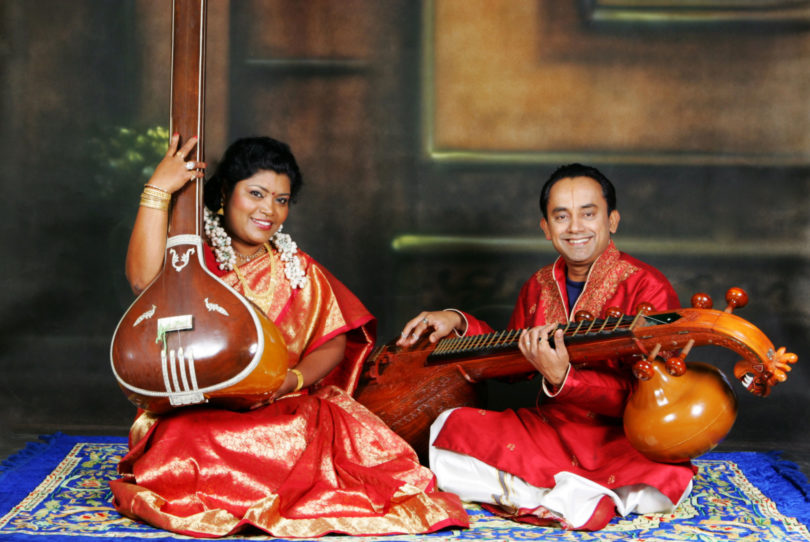 Athens, Ga. – Narayanan “NMK” Muralikrishnan, a veena performer, teacher and advocate of Carnatic music, will present a series of workshops and lectures at the University of Georgia the week of Feb. 25, including a concert March 1 at 8 p.m. in Hugh Hodgson Concert Hall.

Muralikrishnan is the 2013 Gordhan L. and Virginia B. “Jinx” Patel Distinguished Visiting Professor in Indian Musical Arts in the UGA Hugh Hodgson School of Music.

The performance, which is free and open to the public, will feature Muralikrishnan on the Carnatic keyboard and the veena, a stringed instrument similar to a lute and one of the oldest Indian instruments. His family and friends will join him on vocals, the mridangam, kanjira, tabla and other percussion instruments.

“We are so fortunate to have resources allocated to bring in diverse musicians from outside the classical Western tradition,” said Jean Kidula, associate professor of ethnomusicology in the school of music and liaison for the Patel professorship. “It brings a different sound to campus, and we are able to work with great musicians. Muralikrishnan is a first-class veena player.”

A native of Tamil Nadu, India, Muralikrishnan displayed an affinity for music at an early age, studying under teachers such as Suguna Varadhachari, Karaikudi Subramaniam, Parur Venkatrama Iyer and N. Ramanathan. His broad musical education includes graduate work in ethnomusicology at the University of California, Los Angeles and masters degrees from India’s University of Madras and San Diego State University.

In addition to the veena, Muralikrishnan is also a skilled pianist, having studied piano performance at London’s Trinity College of Music.

“His performances blur the line between Western and non-Western music while still preserving his core identity as an Indian musician,” Kidula said. “Apart from featuring instruments new to the professorship—particularly the veena—this will be an exposure to the continuing development of the South Indian classical (Carnatic) music traditions. Those who have attended the Patel professorship concerts in the past will get something completely different out of the experience this year.”

Created in 2008, the Gordhan L. and Virginia B. “Jinx” Patel Distinguished Visiting Professorship in Indian Musical Arts was established to attract Indian musicians of the highest caliber to the school of music, the university and the surrounding community for a week of performance and teaching.