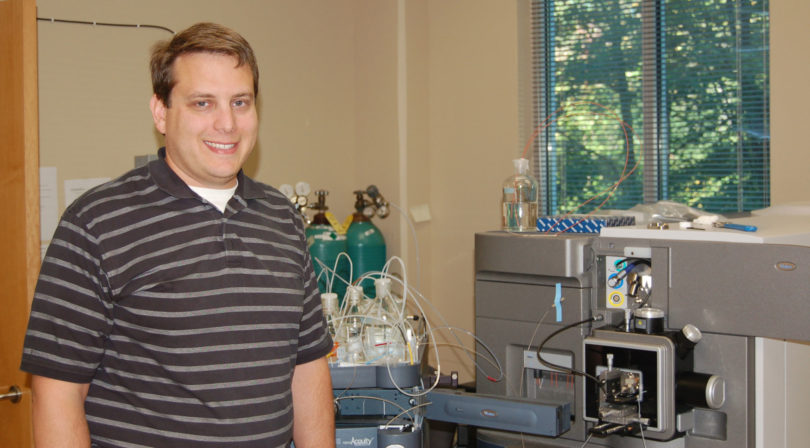 Athens, Ga. – Despite urgent need and tremendous scientific effort, researchers have yet to discover a vaccine for HIV that adequately protects humans from infection. But some people don’t need one. For reasons not completely understood, there are individuals who have developed a natural immunity to the virus without any medical intervention.

Now, thanks in part to a five-year $1.3 million grant from the National Institutes of Health, researchers at the University of Georgia in collaboration with researchers at Scripps Research Institute are trying to mimic this natural immunity in a new vaccine that may one day help stop the disease that infects five million people each year.

“HIV is very good at evading the immune system, but people with natural immunity have antibodies that will protect them against most variations of the virus,” said Joshua Sharp, an analytical chemist and assistant research scientist in UGA’s Complex Carbohydrate Research Center. “We want to figure out how to evoke the same kind of immune response in other people.”

The average person’s immune system will attempt to fight HIV, but normally the virus simply mutates and deflects the attack until it is able to replicate and spread unimpeded.

Sharp’s laboratory, along with with Robert Woods’ computational chemistry group at the University of Georgia and Dennis Burton’s virology group at Scripps Research Institute, is exploring how people with natural immunity to HIV create antibodies that bind with a specific protein on the exterior of the virus called gp120.

Gp120 helps the virus find targets inside the body, latch onto them and invade host cells. Antibodies in people with natural immunity assault this critical protein and disrupt its functions. More importantly, the virus cannot mutate to bypass the attack.

“Nature is a beautiful chemistry lab,” Sharp said. “What we need to do is take these antibodies that we find in nature, reverse engineer them and make them available to everyone.”

Sharp, Woods, and their colleagues will use analytical chemistry tools and computer simulation to develop a clearer idea of how and where these antibodies bind to the virus, and what is required for scientists to make the same thing happen in a vaccine.

Once they know where the antibody binds, researchers can replicate that protein location and try to make the same process happen artificially in someone without natural immunity.

Sharp, Woods, and Burton hope that their new approach will not only result in the long sought-after HIV vaccine but also revolutionize the process of creating vaccines for other diseases.

The human body is a tremendous reservoir for disease fighting tools, he said. In the case of HIV and other important pathogens, it may simply be a matter of understanding and exploiting the natural defenses that have been evolving for millions of years.

The Complex Carbohydrate Research Center was founded at the University of Georgia in 1985, and is one of only three centers worldwide dedicated to the study of complex carbohydrates, which play critical roles in cellular communication, gene expression, immunology, organism defense mechanisms, growth and development. The 140,000-square-foot facility is home to 17 interdisciplinary research groups, including four federally designated centers for carbohydrate research. In addition to UGA research projects, the center also provides analytical services and training to university, government and industrial scientists interested in complex carbohydrate molecules. For more information about the center, see ccrc.uga.edu.