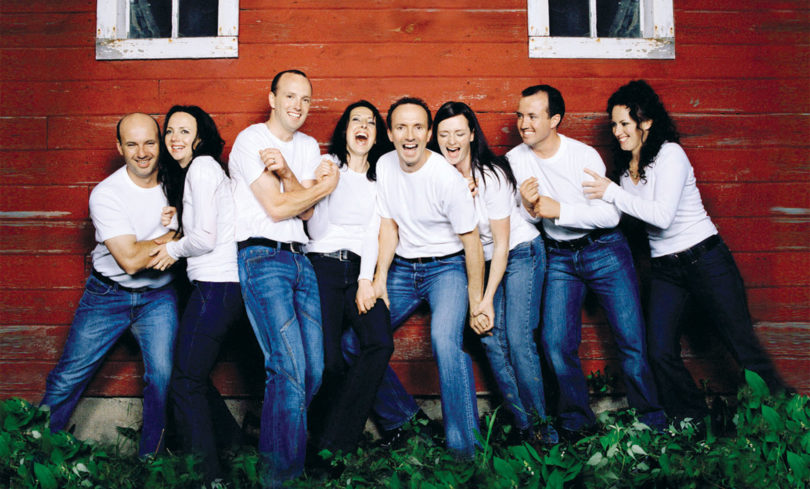 Leahy is a family group of eight brothers and sisters. A documentary about the family and their music won an Oscar.

The Performing Arts Center will present Leahy, an award-winning musical group from Canada, on Oct. 15 at 8 p.m. in Hodgson Concert Hall. Composed of eight brothers and sisters who are instrumentalists, singers and dancers, Leahy performs a mix of folk, country and Celtic music. Tickets are $20-$42 with discounts for UGA students and groups.

The siblings’ life story reads like a Hollywood movie: a large family raised on a farm without a television in the small town of Lakefield, Ontario, Canada. Indeed, their life story was so compelling that it became the subject of a 1985 Oscar-winning film, The Leahys: Music Most of All.

Leahy came onto the international music scene with the 1996 release of its debut self-titled album. The recording swept the Juno Awards (Canada’s Grammy), winning a total of three Junos for best new group, best instrumental album and best country group. The album rose to fourth on the Billboard world music charts and was featured on the soundtrack of the award-winning movie The Hanging Garden.

During the 1998 Juno Award telecast, Leahy’s live performance caught the eye of Canadian superstar Shania Twain, who subsequently invited the group to join her on her two-year worldwide Come on Over Tour.

Leahy is led by renowned fiddler Donnell Leahy, who is married to Celtic fiddler Natalie MacMaster. Donnell Leahy is returning to Hodgson Hall—this time with his own band—after appearing with his wife in a sold-out Performing Arts Center concert during the 2009-2010 season.