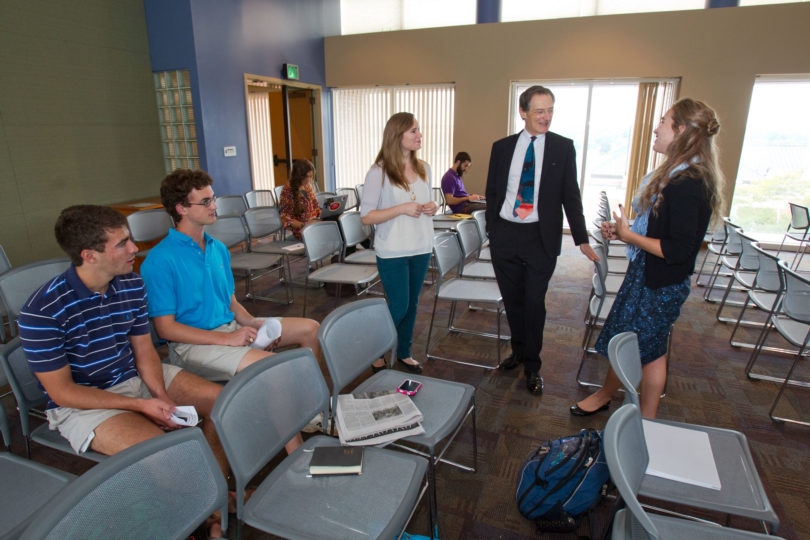 Quentin Skinner, a pre-eminent political theorist and intellectual historian, delivered the 2013 George S. Parthemos Lecture about freedom on Oct. 17 to a standing room audience in the Larry Walker Room of Dean Rusk Hall.

A humanities professor at the University of London, Skinner offered a history of Anglo-centric ideas of freedom but also offered some modern-day examples about the loss of freedom.

Skinner, who also is a distinguished visiting professor at Princeton’s University Center for Human Values, made the case that widespread government surveillance on citizens’ email and other electronic communication-which recently has garnered public awareness-is a violation of freedom.

“This is what the Founding Fathers would call tyranny, and we need to think about it very seriously if we’re thinking about our civil liberties,” he said.

The Parthemos Lecture, organized by the political science department in the School of Public and International Affairs, brings one of the world’s leading political scientists to UGA for a two-day residency.

The lecture is named for George Steven Parthemos, a distinguished political science professor and administrator at UGA from 1953 until his death in 1984.

As part of Skinner’s visit, he not only delivered the lecture but also taught an undergraduate class and met with students and faculty. In his lecture about freedom, Skinner offered a genealogy of theories about freedom in the English and American traditions.

As one example of how freedom can be put into action, he joked to the audience members who were forced to stand after all seats were taken, “You can leave at anytime you like. That’s freedom.”

Skinner then offered his own views on freedom by describing what it is not. The loss of freedom, he said, can be described as “dependence on an arbitrary power.”

By that, Skinner means that people who are subordinate to the whims of authority are not free.

He argued that government surveillance on emails is just this kind of loss of freedom.

Scoffing at the British Parliament’s argument about surveillance that “if you’ve done nothing wrong, then you have nothing to fear,” Skinner countered, “It’s the state which is going to tell you if you have done something wrong.”