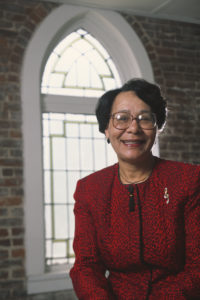 The portrait, by artist Richard Wilson, will be installed in The Gordon Jones Gallery of the Administration Building to honor Early, who went on to become the director of music for Atlanta Public Schools and the first African American president of the Georgia Music Educators Association in 1981.

“Mary Frances Early has been a source of inspiration for generations of students across the state of Georgia and beyond,” President Morehead said. “Her portrait will serve as a lasting tribute to her dignified courage and her commitment to educational excellence.”

“I am so excited about this portrait,” said Early. “I am deeply humbled and honored, and so grateful to be recognized in this way. It’s really quite a tribute.”

The installation of Early’s portrait is part of a series of accolades celebrating her life and career. In January 2018, Early received one of UGA’s highest honors, the President’s Medal. On Sept. 11, the documentary “Mary Frances Early: The Quiet Trailblazer” will premiere in Atlanta. The executive producer and senior researcher of the documentary is Maurice Daniels, dean emeritus at the UGA School of Social Work. Georgia Public Broadcasting also will air the documentary.

Early, who was class valedictorian at Henry McNeal Turner High School and earned a bachelor’s degree in music education from Clark Atlanta University in 1957, became a music teacher in the Atlanta Public Schools and was eventually promoted to music director of the entire school system. Early worked with teachers in the system’s 100-plus schools, and was in charge of the music curriculum, budget, textbooks and more.

Columns will feature Early in UGA’s Georgia Groundbreakers series in mid-September. Launched in 2017, the series celebrates innovative and visionary faculty, students, alumni and leaders throughout the history of the University of Georgia—and their profound, enduring impact on Georgia, the nation and the world.