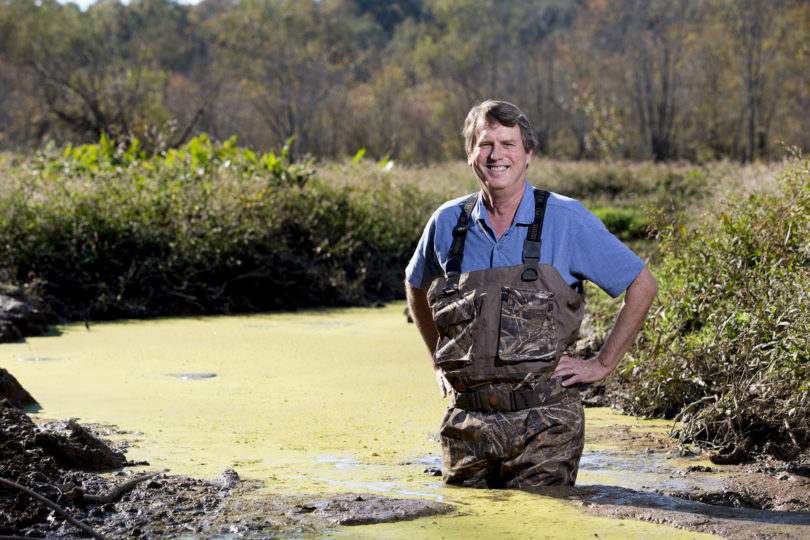 Darold Batzer's classes help students connect a new knowledge of insects to current events and the world outside the classroom.

Professor of Entomology
College of Agricultural and Environmental Sciences

It’s Tuesday at 11 a.m., and a rapt classroom of students is gazing up at huge pictures of rashes and macroscopic photos of the insects that caused them.

Batzer has been teaching students about the incredibly small, but powerful, world of insects since joining UGA’s College of Agricultural and Environmental Sciences entomology department 20 years ago.

In courses like “Medical Entomology” and the study-abroad course “The Natural History of Insects,” Batzer helps undergraduate students from all majors connect a new knowledge of insects to current events and the world outside the classroom.

“Pre-med students often take my undergraduate entomology courses, and they learn about some truly horrible insect-borne diseases that annually affect millions of people in the tropics, mostly children,” Batzer said. “At the same time, they learn something about biodiversity and ecology and hopefully gain more appreciation of the natural world.”

On South Campus, Batzer is best known for founding UGA’s first courses in wetland ecology. Today, his graduate-level classes, which focus on wetland ecology and aquatic invertebrates, are routinely cited as some of the most impactful of students’ graduate school careers, according to the UGA Career Center.

“Dr. Batzer is one of the most engaging and passionate teachers I have come across in my many years as a student. His use of class discussions and field trips were far more beneficial to me than a strictly lecture format,” wrote former graduate student Courtney Holt in a recent award nomination letter. “The combination of lecture, discussion and field (i.e., real-world) work has made the information I learned in his (aquatic entomology and wetland ecology) classes more memorable and applicable.”

Recently Batzer was honored with the D.W. Brooks Award for Excellence in Teaching, the highest teaching honor given by the agricultural and environmental sciences college. However, he started his career as a field scientist studying freshwater ecology by focusing on insects.

Originally from Minnesota, he received his doctorate in entomology from the University of California at Berkley in 1991 and completed a National Science Foundation-funded postdoctoral fellowship at Cornell University before coming to UGA.

Over the years, his research has focused on using wetland invertebrate populations to monitor wetland ecosystem health, cataloging the change in populations after outside impacts like floods, logging or drought.

One of his current projects is an EPA-funded study of the benefits of preserving wetlands on working farms and whether preserving wetlands helps increase the population of beneficial insects on farmland. He is currently working with an interdisciplinary team of researchers ranging from forestry to forage science at UGA’s Iron Horse Farm on Georgia Highway 15.