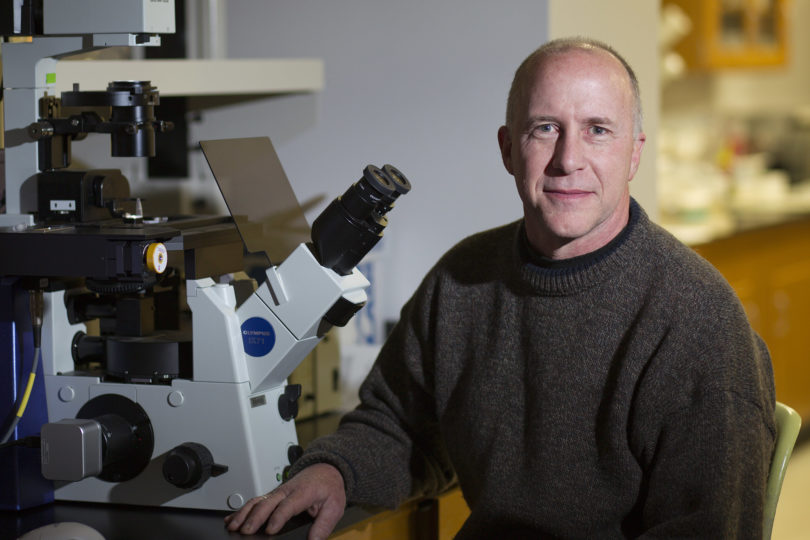 Al Camus is on call 24 hours a day, but he’s not rushing into hospitals to see patients. In fact, most of the subjects he sees are found in aquariums, ponds and waterways.

Camus is a veterinary pathologist and an associate professor of fish pathology at the UGA College of Veterinary Medicine. He specializes in fish health and disease diagnosis. As an anatomic pathologist, his desk is covered in glass slides containing samples of preserved tissues, each possibly revealing clues to the ailment that killed a fish.

“People are often surprised to learn that fish suffer from representatives of all the same general types of disease-causing agents found in higher vertebrates, including humans,” he said. “So in one piece of tissue we may find a tapeworm with a mouthful of intestine, fungus inside a swim bladder or bacteria destroying internal organs.”

Before moving to Georgia, Camus worked in Louisiana and Mississippi with commercial “fish farmers” as-in his words-“a coroner for catfish.” Now, he works mostly with public aquariums. UGA has a formal partnership with the Georgia Aquarium that provides specialized training for two aquatic pathology residents and a clinical resident focusing on zoological and exotic animal medicine.

“The (Georgia ) Aquarium serves as a living classroom that provides an incredible learning experience for our residents and myself,” Camus said.

When Camus came to UGA, he knew virtually nothing about elasmobranch fish, such as sharks and rays.

“One of my biggest surprises has been to learn that, for all of their reputation for toughness, they are actually pretty fragile animals,” he said. “There is little published on diseases of these species, so much of what we see is new. It has been very satisfying to describe a number of conditions for the first time.”

Another slide from the stack on his desk shows a cell nucleus much larger than it should be. It is from an ornamental koi fish infected with koi herpes virus, one of several herpes viruses that affect aquatic animals.

“Infections can be lethal, but other times fish survive to become carriers capable of passing the disease to naive fish,” he said. “This type of scenario, coupled with the increasingly global nature of aquaculture and the ornamental fish trade, has contributed to the rapid dissemination of this and many other potentially serious fish diseases.”

Camus also works with aquariums in Florida, South Carolina and Tennessee. In conjunction with the Athens Veterinary Diagnostic Laboratory, he also provides diagnostic services to private veterinary practitioners, fish hobbyists, aquaculture interests and the university community. His research interests are varied, but he admits a soft spot for parasites.

“Aquariums and aquaculture operations present a very different set of diagnostic challenges,” he said. “Although new diseases are emerging all the time, most cultured fish species, such as catfish and salmon, have their own limited group of well-defined and readily recognized disease entities. In comparison, due to the diversity of fish species displayed in aquariums-you have no earthly idea. Every day and potentially every disease is different. It keeps life interesting.”