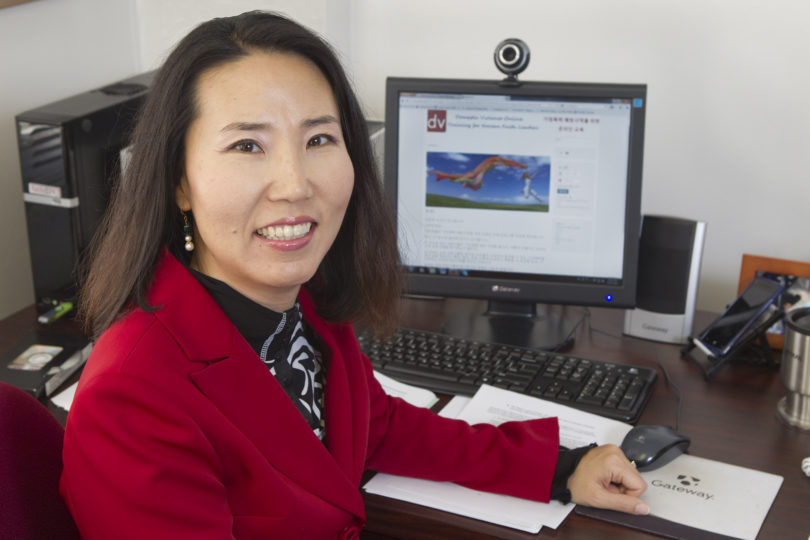 America is known as “the land of the free.”

For Korean immigrant women trapped in abusive relationships, though, freedom is a luxury many think they can’t afford. Unfamiliar with English and ignorant of their options, they are often entirely dependent on their abusers.

“The partner may be the only person providing support and navigating the American system,” said Y. Joon Choi, an assistant professor in the School of Social Work.

Victims often don’t reach out to their communities, either, said Choi, because Korean women traditionally are expected to be patient and suffer in silence. The result, she added, is a higher incidence of hidden abuse than their American-born counterparts.

Choi, a South Korean native, aims to change that. She has been studying the abuse of women since she was an undergraduate student in Seoul, when two high-profile cases of Korean prostitutes murdered by U.S. soldiers “sparked a fire in me,” she said.

The issue convinced her to pursue a master’s degree in international relations at City University of New York. While there, Choi volunteered at an Asian women’s shelter, where she noticed how the lack of English skills, isolation, cultural attitudes and ignorance of the law and of support services combined to create huge hurdles for immigrant women seeking to escape their abusers.

After graduating, Choi continued to work at the shelter but became frustrated by how available services “didn’t stop domestic violence.” She went on to earn master’s and doctoral degrees in social work to better address domestic violence through prevention. For her doctoral dissertation, she surveyed Korean ministers’ responses to battered immigrant women.

“If the victim has the courage to seek help, she often will seek it from a religious institution,” Choi said. “Korean clergy are very conflicted, though. They see their responsibility as keeping the family together. They also are not trained to deal with domestic violence.”

Since joining the School of Social Work, Choi has continued to look at barriers to aiding battered women and to prevention of domestic violence in the Korean American community. She currently is working with Joe Phua, an assistant professor and digital communications expert in the Grady College of Journalism and Mass Communication, to develop an online program to educate Korean American faith leaders about abuser and victim behavior.

Funded by a Research in Diversity Seed Grant from the Office of the Vice President for Research and the Office of Institutional Diversity, the pair have prepared an online training system in Korean and English that shows faith leaders how to identify, manage and refer domestic violence cases that occur within their congregations, as well as prevention activities they can implement.

The duo is testing the pilot program with a small sample of clergy this spring and plan to test it with a larger group in the coming year. If the training program works, it will be made available nationally, Choi said. She believes the program’s format also can be broadened and adapted to Latino and other immigrant communities where affiliation with religious organizations is high.

“I want it to be useful to everybody,” Choi said. “It’s not about changing just one person’s attitude towards domestic violence, it’s about changing community attitudes.”