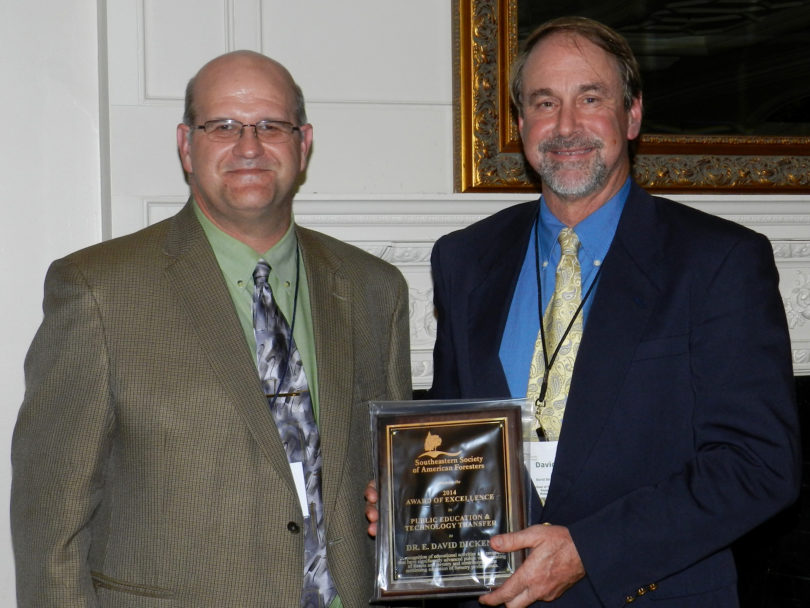 Athens, Ga. – Two University of Georgia professors recently received awards from the Southeastern Society of American Foresters, which recognized them for their service to forestry education and research.

Both Dickens and Kane are professors in UGA’s Warnell School of Forestry and Natural Resources.

Mike Mengak, associate dean of outreach at the Warnell School, said he has witnessed Dickens’ enthusiasm for educating the public about forestry for more than a decade and has seen firsthand how engaged he is at workshops and conferences.

“I am frequently reminded of the high quality of David’s work, his passion for his work and his commitment to UGA, public education and outreach and to the forestry profession,” Mengak said.

Kane is a professor of quantitative silviculture and the director of the Plantation Management Research Cooperative, which is a university-private sector research cooperative dedicated to researching pine plantations in the southern U.S. He focuses on southern pine plantations to design methods for the wise use and management of forests through proper silviculture practices, productivity and sustainability. As director of the cooperative, he works with researchers at UGA and other institutions on issues such as climate change, biomass production and sustainable forest management. In the last eight years, he has led research projects with grants totaling $4.2 million.

“Being recognized by SESAF for excellence in research is a great honor,” he said. “This award reflects a sustained, strong team effort by participants in the Plantation Management Research Cooperative to improve southern pine plantation silviculture and biometrics technology. I am very appreciative of the support and efforts of the Warnell School and the PMRC’s private sector cooperators.”

Dale Greene, interim dean of the Warnell School, called Kane a “rare individual. He is not only an outstanding scientist, but a gifted teacher and a highly effective research program leader.”

UGA Warnell School of Forestry and Natural Resources
The Warnell School of Forestry and Natural Resources at UGA is the oldest existing forestry school in the South. The Warnell School’s educational and outreach programs focus on the conservation and management of Earth’s natural resources, including forests, fisheries, wildlife and water sources. The school emphasizes the importance of balanced management of ecosystems throughout Georgia and the world. For more information, see www.warnell.uga.edu.