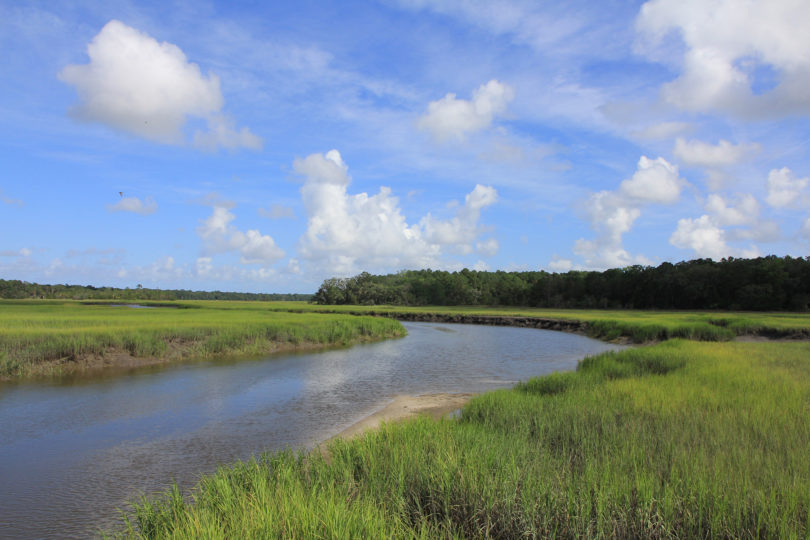 Athens, Ga. – Protecting a county’s natural resources and its fiscal health may seem to be competing goals, but a recent University of Georgia study provides a blueprint for achieving both.

The paper, which appears in the journal Landscape and Urban Planning, offers a new way to assess the financial and environmental costs and benefits of development. Focusing on McIntosh County, Georgia, the study’s authors make recommendations to help keep down the costs of growth and also preserve the area’s natural resources and the services they provide.

McIntosh County is one of the least developed counties on the east coast of the U.S., with forests and salt marshes accounting for 95 percent of its land area. Like other coastal areas, however, it is poised for increasing growth as retirees and second-home buyers are attracted to its scenic beauty and recreational opportunities.

Such residential development provides a new source of tax revenue, but it also comes with costs. These include providing services such as new roads and more police and fire protection.

Costs also are incurred as ecosystem services are lost when natural areas are developed. Ecosystem services are things like water purification, flood storage and carbon sequestration that nature does for free. They are more difficult to value, so often aren’t taken into consideration.

J.P. Schmidt, an ecologist in the UGA Odum School of Ecology and the study’s lead author, was interested in both kinds of costs. “I decided to look for the win-wins,” he said. “How could development be cost-effective for the county and at the same time protect areas that are most valuable in terms of ecosystem services?”

Consistent with such studies conducted elsewhere, the researchers found that residential land costs more in services than it brings in to the county in taxes: For every dollar of revenue generated by residential property, the county spends $1.43 to provide services. Commercial property generates more revenue than it costs in services, as does rural land, which costs only $0.65 in services per tax dollar generated.

For ecosystem services, Schmidt and his colleagues used estimates from published studies for the value of services provided by forests, forested wetlands and salt marshes.

Putting the two analyses together, they ranked different landscape types by the value of services provided and by net cost to the local government. “We were looking for what’s optimal from both perspectives,” Schmidt said—and they found it.

“We found that forested wetlands are really valuable from the perspective of a number of ecosystem services like water filtration, water storage, flood control, biodiversity, carbon sequestration and nutrient absorption,” he said. “When they’re harvested, they’re not high-value for timber—landowners don’t make a whole lot of money, and it doesn’t generate much for the county in terms of sales tax or revenue that way. So it suggests that these are areas that should really be targeted for payments for environmental services.”

Such payment schemes typically take the form of tax incentives through programs like the statewide Conservation Use Valuation Assessment, Agricultural Preferential Assessment and Forest Land Protection Act. These programs are largely designed to limit conversion of forest and agricultural lands to residential and other uses.

Schmidt suggested that such incentives could be broadened to encourage landowners to forego harvesting timber in bottomland hardwood and swamp forests.

“There’s a lot of marsh edge habitat that’s the prime real estate where resort housing tends to get put,” Schmidt said. “And a lot of that is within the 500-year floodplain—essentially in harm’s way. Just by limiting what can be put in the 500-year floodplain, what is built would be a lot less vulnerable to the infrequent but potentially severe storms that come in. In addition, a lot of maritime forest habitat could be preserved along with a buffer that would allow marsh to migrate inland as sea level rises.”

Schmidt hoped the study would be useful not only to McIntosh County planners but to those in other rural areas facing development pressure. He added that the methods described in the paper could be adapted for use at larger scales.

“I’d like to expand the study to the entire coast,” he said.

The research was supported by Georgia Sea Grant and the Coastal Georgia Ecosystems Long Term Ecological Research site, in collaboration with the McIntosh County, Georgia, government. The study is available at http://dx.doi.org/10.1016/j.landurbplan.2013.11.008.