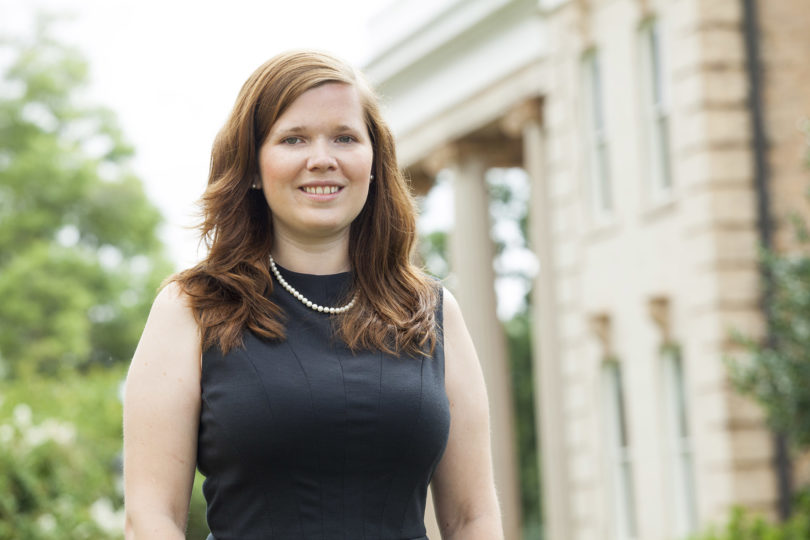 As a UGA undergraduate, Tawny Waltz always expected to pursue a career in government.

After all, she earned her bachelor’s degree in international affairs and political science from the university’s School of Public and International Affairs in 2010, followed by her Master of Public Administration from SPIA in 2012. But during that program, she took two classes taught by Cham Dallas and Curtis Harris, director and associate director, respectively, of the College of Public Health’s Institute for Disaster Management.

“When I was about to graduate, Dr. Harris called me into his office and asked if I would like to stay on and work for them,” Waltz said. “I told him that I knew absolutely nothing about public health and disaster management except for what I learned in class.”

Four years later, Waltz’s role as the institute’s manager of emergency preparedness has provided her with opportunities to be part of the process of developing academic literature on emergency management, training hospitals and health care systems in emergency preparedness, and designing and teaching graduate-level courses in the College of Public Health. She is a certified hospital trainer for decontamination and also trains workers at health care facilities throughout the state in incident command, two roles that allow her to supplement her teaching with real-world experience.

Waltz’s primary focus at the institute is health care disaster preparedness. She assists with large-scale, mass casualty exercises for hospitals and health care systems throughout the state of Georgia, a role the institute has managed through a contract with the Georgia Department of Public Health since 2006. With Waltz’s help, this program has become the national standard.

“The goal is really for them to become better prepared and identify gaps and opportunities for improvement in their planning and coordination so that when a real emergency happens, they’re more prepared than they would have been otherwise,” said Waltz, who is working on numerous research projects that will add to existing literature on emergency management, a field that has greatly advanced in recent years.

“I fell in love with this field because it’s really not one where there’s a lot of information out there, especially from academics,” Waltz said. “Emergency management is something that came to the forefront over the years as we saw disasters, but especially after Sept. 11.”

Some of Waltz’s research projects include best practices for state-based systems of Ebola monitoring, incident management for health care coalitions and the role of the hospital and city emergency managers in crisis preparedness. She enjoys the support her work receives from the state of Georgia as she gets to contribute to nationally recognized efforts.

“A lot of the states don’t have the support that Georgia has built in terms of emergency management, especially in the health care field,” Waltz said. “We’re really seen as one of the leaders for what we do.”

Though Waltz enjoys the opportunity to balance different projects, she maintains the best part of her job is her team at the Institute for Disaster Management.

“I work with a great team of people,” Waltz said. “What I love most about my job is that we all come from different backgrounds, and we each have a different perspective to add.

“I never know what I’m going to walk in and get assigned for the day, or what projects are going to come our way, but we tackle whatever we’re given,” she added. “If we don’t know it, we learn it.”