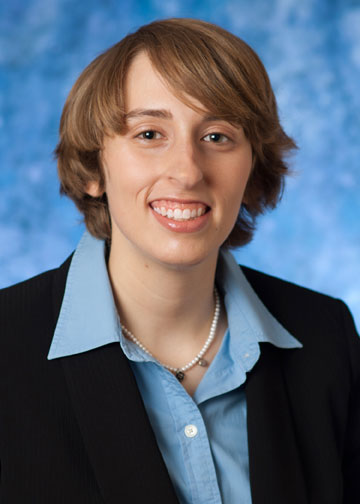 Betsy Katz is one of 12 national recipients of the 2011-2012 George J. Mitchell Scholarship.

Betsy Katz of Thomasville, a 2009 graduate of UGA’s Honors Program, is one of 12 national recipients of a 2011-2012 George J. Mitchell Scholarship, sponsored by the U.S.-Ireland Alliance. She plans to pursue a master’s degree in intercultural studies at Dublin City University in Ireland.

Katz, who earned bachelor’s degrees in mathematics, Spanish and religion from UGA, currently is teaching secondary mathematics in Richmond, Calif., as a Teach for America participant.

This is the third consecutive year a UGA student has been named a Mitchell Scholar. The one-year post-graduate fellowship, named after former Sen. George Mitchell for his role as chairman of the Northern Ireland peace talks, covers studies in any discipline offered by institutions in Ireland and Northern Ireland. Applicants are judged on three criteria: academic excellence leadership and a sustained commitment to service and community.

“For Betsy Katz to be one of only 12 recipients of a Mitchell Scholarship speaks volumes about her intelligence, her passion for her academic pursuits, her commitment to making the world a better place, and to the level of instruction and challenge she enjoyed while a UGA student,” said UGA President Michael F. Adams. “She now has the opportunity to pursue her studies in one of the world’s most beautiful places. I am confident that we will hear more from and about Betsy in the years to come.”

At UGA, Katz was a Ramsey Honors Scholar and was elected to Phi Beta Kappa and Blue Key honor societies. She was one of eight participants working with mathematics faculty at the University of North Carolina, Asheville through the National Science Foundation’s Research Experiences for Undergraduates. She served as a Spanish-English interpreter and tutor and ESOL teacher.

“Betsy has uncommon abilities and promise,” said David S. Williams, director of UGA’s Honors Program. “She intends to become a leader at the national level in the resolution of ethnic conflict in the U.S. Her energy is astounding, and her commitment is inspiring. There is no question that she will make a very positive impact on society.”