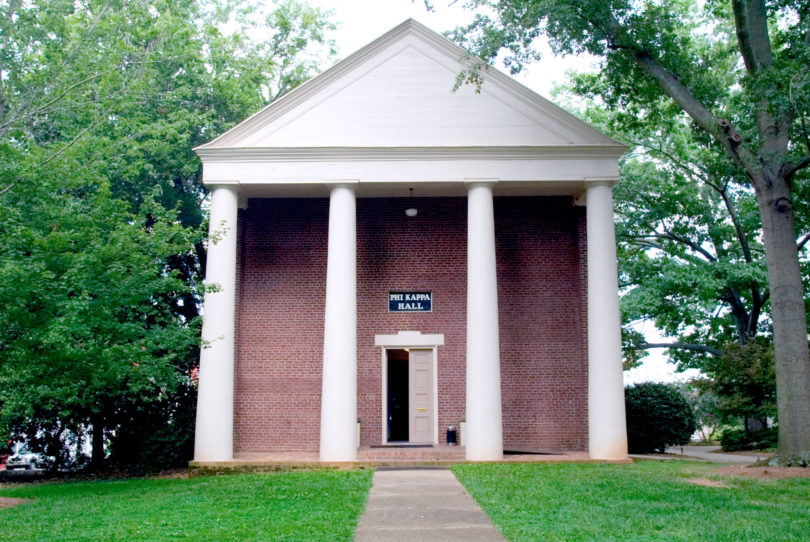 Question of Iraqi freedom to be debated as part of ceremony

In 1820, as a debate on freedom and democracy in Greece was argued across the globe, a small group of students at the University of Georgia was forming a debating society and would eventually take up the topic of Greek independence themselves. On March 28, 1823, members of the new group, the Phi Kappa Literary Society, debated the question, “Ought the United States assist the Greeks in their struggle for liberty?”

Nearly to the day 182 years later, UGA student debaters will argue a similar question-this time in the context of the war in Iraq-as part of a ceremony rededicating the newly renovated Phi Kappa Hall.

“Ought the United States assist the Iraqis in their struggle for liberty?” will be debated by members of Phi Kappa and the Georgia Debate Union in the Chapel on March 30 at 3 p.m., followed by a ribbon-cutting ceremony in front of Phi Kappa Hall; a reception will follow and guests may tour the building.

As the seventh-oldest building on campus, Phi Kappa Hall was in need of attention, according to Scott Messer with the Office of University Architects. The bottom floor, which serves as the Georgia Debate Union headquarters, had been renovated a number of times; the upper floor, where Phi Kappa holds its meetings, had remained largely untouched, “making it one of the most pristine places on campus from an historical aspect,” says Messer.

Among other things, the mechanical system in the building was updated, and the architects employed a mixture of renovation and restoration to make the building a suitable, functioning meeting place for both groups.

“The renovation of space dedicated to student organizations affirms the administration’s commitment to improving the undergraduate experience at Georgia,” says Edward Panetta, director of the Georgia Debate Union and associate professor of speech communication. “The renovated Phi Kappa Hall should help Georgia Debate’s efforts to recruit talented debaters to UGA. And, the restored upper hall should attract more students to the Phi Kappa weekly meetings. I believe that the membership of both groups couldn’t be happier with the work that has been done on this project.”