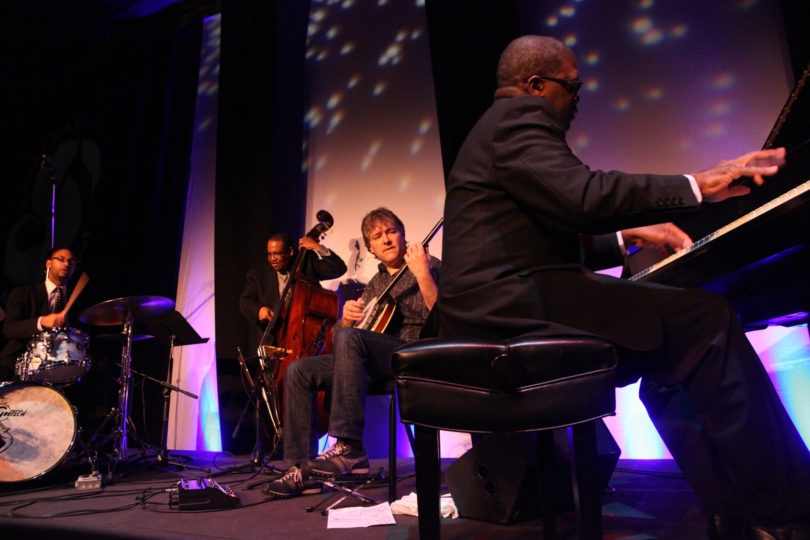 Béla Fleck, the world’s premier banjo player, will join forces with classic jazz traditionalists the Marcus Roberts Trio Nov.  9 at 8 p.m. in Hodgson Concert Hall of the Performing Arts Center. Tickets are $20-$47 with discounts for UGA students and groups.

The concert will showcase selections from the musicians’ recently released joint album, Across the Imaginary Divide.

At the 2010 Savannah Music Festival, Fleck sat in with jazz pianist Marcus Roberts for an impromptu jam session. The unlikely pairing caused a sensation and resulted in the new, critically acclaimed recording.

A native New Yorker, Fleck began playing the banjo at age 15 after being impressed by the bluegrass music of guitarist Lester Flatt and banjo player Earl Scruggs, who founded the Foggy Mountain Boys.

In 1980 Fleck released his first solo album, Crossing the Tracks, with material that ranged from straight-ahead bluegrass to instrumental jazz fusion.  In 1982 Fleck joined the progressive bluegrass band New Grass Revival, and in 1989 he formed the genre-busting Flecktones. Boasting 14 Grammy Awards and 30 nominations, Fleck has been nominated in more different categories than anyone in Grammy history.

Roberts, who lost his sight at age 5, founded his trio in 1995. Led by Roberts on piano, the group also features Jason Marsalis on drums and Rodney Jordan on bass. Although the piano is typically the focus of most jazz trios, in the Marcus Roberts Trio all musicians share equally in shaping the direction of the music. The trio is known for a virtuosic style that is strongly rhythmic, melodic and filled with dynamic contrast.

This concert is part of the Spotlight on the Arts at UGA, a nine-day celebration of the arts.