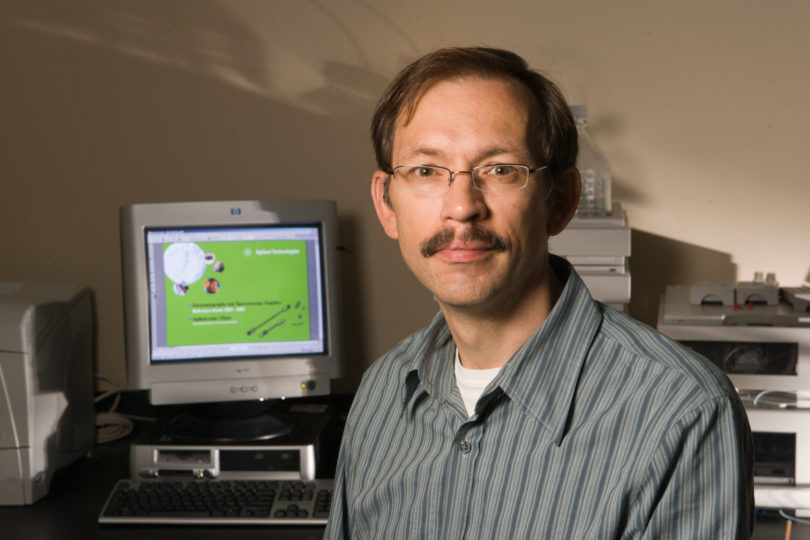 When cells become cancerous, the sugars on their surfaces undergo distinct changes that set them apart from healthy cells. For decades, scientists have tried to exploit these differences by training the immune system to attack cancerous cells before they can spread and ravage the body.

Now, researchers at the UGA Cancer Center have synthesized a carbohydrate-based vaccine that—in mice— has successfully triggered a strong immune response to cancer cells. The finding, published in the October issue of the journal Nature Chemical Biology, brings the scientists one step closer to a much-sought-after “cancer vaccine.”

“In mice we can elicit very strong antibody responses, and we have shown that the antibody responses are functional—that they can kill cancer cells,” said lead author Geert-Jan Boons, Franklin Professor of chemistry.

The discovery in the 1970s of unique sugars on cancer cells set scientists in search of a way to get the immune system to recognize and attack cells that express these cancer-associated sugars. Until now, however, the results have been less than spectacular.

Cancer cells originate in the body, and the immune system leaves them alone because it distinguishes between the body’s own cells and foreign invaders such as viruses and bacteria.

Early cancer vaccines were created by linking the tumor-associated carbohydrate with a foreign protein, according to Boons. The immune system, perhaps not surprisingly, attacked the protein and the linker molecules, but generally left the carbohydrate alone.

Rather than using naturally derived and purified proteins and linkers, Boons and his team created a vaccine synthetically from scratch by stacking molecules together and arranging them in the appropriate configuration. In 2005, they created a fully synthetic vaccine that stimulated an immune response to the tumor-associated carbohydrate alone. The vaccine stimulated only low antibody levels, however, so the researchers began optimizing the components of the vaccine to elicit a stronger immune response.

The vaccine has been successful in creating an antibody response that can kill cultured epithelial cells – those commonly involved in most solid tumors–derived from mice and in stimulating an immune response in healthy mice. The researchers are currently testing the vaccine in mice with cancer, and Boons hopes to start phase I clinical trials in humans within a year.

Despite his enthusiasm for his work, Boons cautions that it’s too early to predict how the vaccine will perform in humans.