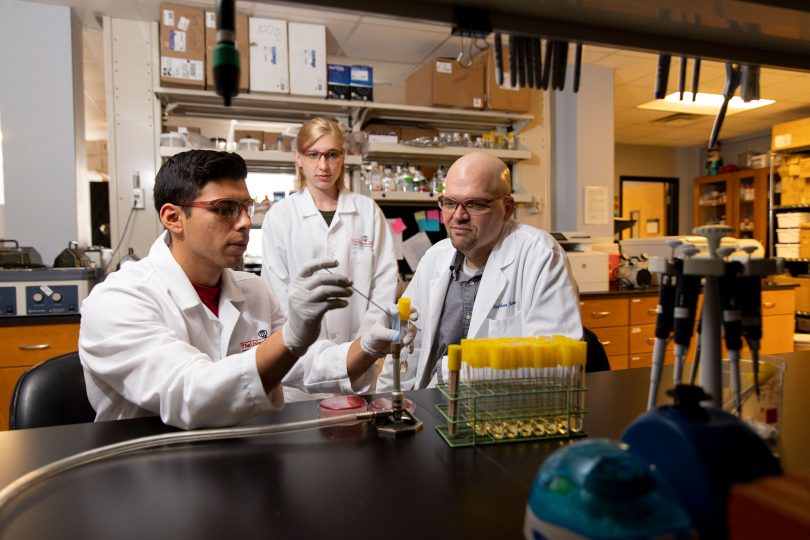 Graduate students (from left) Martin Douglass and Alexandria Purcell work in the laboratory with professor Stephen Trent in 2019. (Photo by Andrew Davis Tucker/UGA)

Significance of molecule in bacteria was previously unknown

Gram-negative bacteria are the bane of health care workers’ existence.

They’re one of the most dangerous organisms to become infected with—and one of the hardest to treat. But new research from the University of Georgia suggests a component of bacteria’s cell walls may hold the key to crushing the antibiotic-resistant microbes.

The reason Gram-negative bacteria are difficult to kill is their double cell membranes, which create an almost impenetrable shield of protection. This shield blocks antibiotics from entering, preventing medications from doing their job of destroying the bacteria. Meanwhile, toxic molecules, known as lipopolysaccharides, on the surface of the bacteria’s outer membrane provoke a potentially deadly immune response.

In the study published by PNAS, researchers at the College of Veterinary Medicine identified the molecule cardiolipin’s key role in getting those toxic molecules onto the membrane surface, something that could serve as a new target for future therapeutics.

“If you ask where we’re having the most trouble in the world of antibiotic resistance, it is with Gram-negative bacteria,” said Stephen Trent, corresponding author of the study and a UGA Foundation Distinguished Professor of Infectious Diseases. “The implication of this finding is that without cardiolipin, bacteria can’t make the outer membrane. Without that membrane, they’re sensitive to antibiotics and the bacteria is toast.”

Blocking transport to the cell membrane could not only make bacteria vulnerable to antibiotics, but the accumulation of their own toxic molecules within the cell also cause the bacteria’s death. 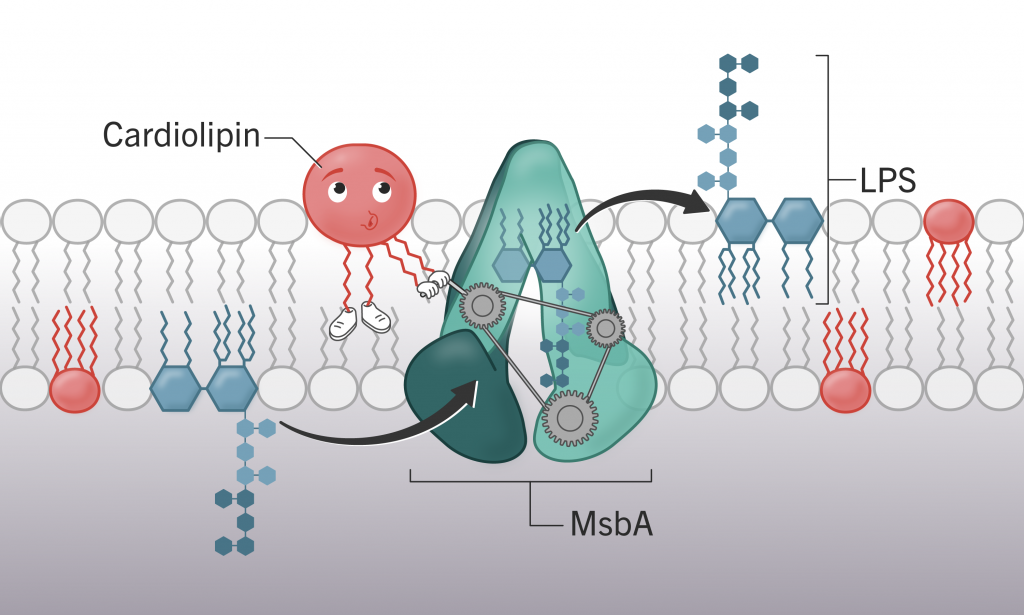 Prior to the study, no one really understood cardiolipin’s role in bacteria. In animals, however, it plays an integral part in making up the membrane of mitochondria, the organelles from which cells generate energy.

To determine the molecule’s role in bacteria, the researchers created mutant forms of E. coli, which has multiple ways of making cardiolipin, to try to determine what purpose the lipid served in the cell. The team manipulated the enzymes responsible for building cardiolipin to see whether their disruption had any effect on the bacterium.

Those experiments showed that altering the cardiolipin production in a bacteria’s cell had deadly ramifications for the bacteria. Without cardiolipin, the cell will continue to produce its toxic lipopolysaccharides but is unable to transport them to the cell surface.

“Eventually the cell will pop open. They just bust,” Trent said. And without the large molecules on the cell surface, the bacteria’s armor that typically would make it invulnerable to most antibiotics becomes penetrable.

“This paper is one of the first to link cardiolipin to maintaining the outer membrane of E. coli,” said Martin Douglass, lead author of the paper and a doctoral student in UGA’s Department of Infectious Diseases. “Future therapeutics could target aspects of this process and make Gram-negative bacteria vulnerable to antibiotics.”