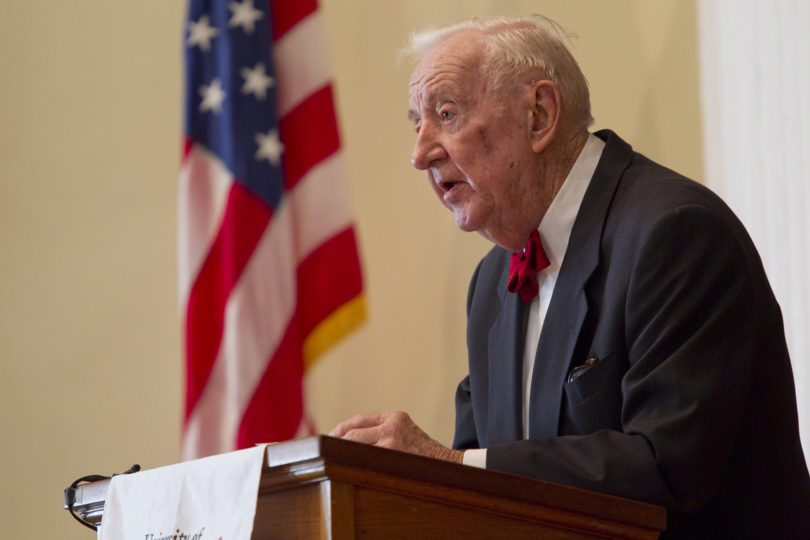 Retired U.S. Supreme Court Justice John Paul Stevens made an argument against relying too much on history to interpret laws as he spoke to an audience in the Chapel.

Stevens, the keynote speaker for the Nov. 6 “The Press and the Constitution 50 Years after New York Times v. Sullivan” conference, said originalism—the political theory that the original intent or meaning of the U.S. Constitution or laws should be used in judicial interpretations—relies heavily on history that may not be entirely accurate.

“History is, at best, an inexact field of study,” he said. “Even the most qualified historians may interpret events differently.”

As an example, Stevens shared a memory of a 1939 childhood trip to Florida that included a stop in Atlanta. While in the state’s capital, Stevens and his family went to see the movie Gone With the Wind.
“As I remember, when ‘Dixie’ was played, the audience was deeply moved, and I was afraid to whisper lest my accent reveal I was from the North,” he quipped.

Stevens went on to explain he later found out his memory of the scene was not correct; it never actually happened in the movie.

If events can be recalled incorrectly or disputed, the intentions of legislators also cannot be relied upon, said Stevens, who was appointed to the high court in 1975 by President Gerald Ford.

Stevens argued that the original legislator’s “reason for a new rule” may not always work when justices have to make rulings in modern times. Stevens said that Brown v. Board of Education—a 1954 case in which the U.S. Supreme Court found racial segregation a violation of the Equal Protection Clause of the 14th Amendment—is one of the best cases against originalism.

“A study of the original intent of the 14th Amendment wouldn’t have shown an argument for desegregation,” Stevens said.

Steven did say that he feels a study of what past leaders said can help inform justices, but it should not weigh on their judgment.

“I never object to the use of history,” he said. “I think it is not the correct standard to make a decision case after case. I certainly do not criticize anyone for studying the history of an issue to learn more about it.”

Stevens also said he didn’t feel the current U.S. Supreme Court is “dysfunctional” after one audience member asked his thoughts on the bench today.

“It has made a number of decisions I have thought were wrong, but the system is functioning,” he said.

Stevens also told an audience member he didn’t view a proposal to limit the terms of Supreme Court justices to 18 years as “a frivolous suggestion,” but that longer terms are more preferable.

“I do think that in the long run, allowing judges to serve as long as they are capable is in the country’s best interest,” said Stevens, who retired from the court in 2010 at age 90.

“Also, the other judges are able to let one another know when it’s time to leave,” he added jokingly.