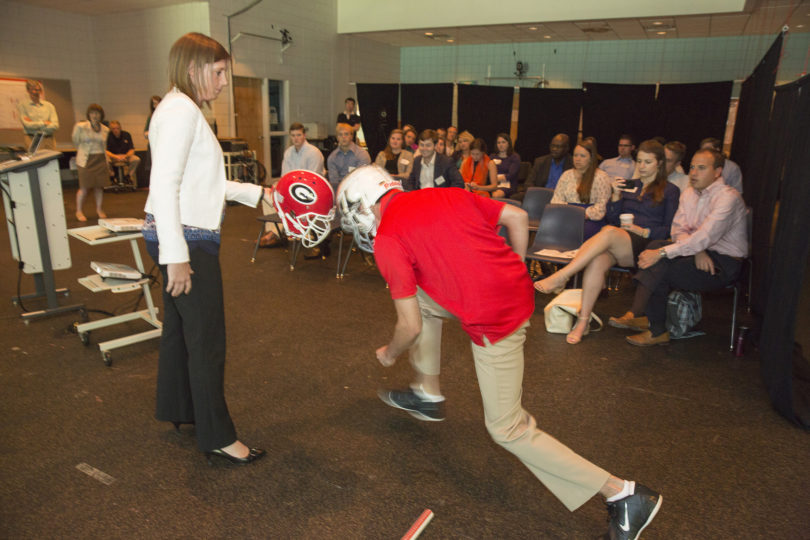 Wearing a helmet wired with accelerometers

Julianne Schmidt is used to people smacking her research equipment around, knocking into it with their heads and dropping it on the ground. An assistant professor of kinesiology in the College of Education, she spends her days studying concussions, and her key tool in the task is a football helmet loaded with sensors.

On Aug. 21, instead of explaining the technology to football players—she uses the UGA football team as her primary source of data—she stood in front of a group of federal legislative staffers, 28 individuals who potentially could influence the funding that flows into her lab.

“Right now, we don’t know how concussions happen,” she told the group. “And if we don’t understand that, we can’t prevent them.”

The UGA Biomechanical Lab was just one stop among many that the legislative staffers—representing 13 of Georgia’s 16 House and Senate offices—made during their day and a half on campus. They heard talks about the importance of increasing UGA’s research profile from Pamela Whitten, senior vice president for academic affairs and provost, and had lunch with head football coach Mark Richt.

The staffers ended their retreat with talks on concussion research and muscle exercise physiology by Schmidt; Ron Courson, the UGA Athletic Association director of sports medicine; Kevin McCully, a professor of exercise science; and Janet Buckworth, head of the kinesiology department.

On Aug. 20, they also donned hard hats for a glimpse at the partnership that has formed between the university and the Caterpillar plant located in west Athens. During the tour, Don Leo, dean of the UGA College of Engineering, and Todd Henry, Caterpillar operations manager, discussed how the university and community are working together.

Approximately 20 UGA engineering students have participated in Caterpillar internships and work cooperatives, while almost 100 others have experienced educational tours and overviews of the local plant, Leo said. Alumni from the college now are employed at Caterpillar in direct engineering positions, enhancing the plant’s growing workforce-expected to employ as many as 1,400 people by 2018. In return, Henry serves as a leading member of the college’s Engineering Advisory Board. The two entities also have collaborated as benefactors for community charities.

“This was an excellent opportunity to showcase a successful collaboration between two institutions that share a common goal of economic growth for Georgia,” Leo said.

The university has been showcasing its strengths, priorities and research projects to legislative staffers for years. This year, the Office of Government Relations, which hosts the retreat, saw the number of attendees jump from 19 to 28.

“Our goal every year is to give federal staff a firsthand account of what UGA is,” said Andrew Dill, UGA’s director of federal relations. “We’re showing them that UGA is a good steward of the federal funds we receive for research, which is critical not only for education and innovation but job creation in our state.”

Jennifer Choudhry, the legislative director for Rep. Doug Collins (R-09), said it was “incredible to see firsthand how UGA maximizes every dollar of federal research funds to make cutting edge breakthroughs that have the potential to radically change the world we live in for the better.

“As a land-grant university, the work of the faculty and students at UGA is truly making the state of Georgia a better place and redefining what it means to educate and empower students,” she said.

Staffers like Choudhry meet with 30-plus people every day as they serve their legislator’s congressional district. For Dill, who works daily with UGA faculty members who have traveled to Washington, D.C., hosting congressional staff in Athens makes his job easier.

“Having the opportunity to showcase UGA’s priorities changes the dynamic of a relationship,” he said, “which I think is important for the university. To have a visual to show the staffers and to be able to take them to see something, the impact of that is resounding.”

Congressional staff spend most of their days hearing about the new and innovative. But even they can be surprised.

“I hadn’t realized that UGA has been so much at the forefront of research on concussions,” said Jay Sulzmann, legislative director for Sen. Johnny Isakson (R-Ga). “I was also impressed to hear about the average GPA for the incoming freshman class,” which this year averages 3.9 on a 4.0 scale.

“One thing that wasn’t new to me but that I thought was very helpful was having the whole group hear about the advancements in pluripotent stem cell research,” he said in reference to Dalton’s research, “that have enabled this research to be carried out without the ethical or sanctity of life concerns that were widely debated several years ago. It’s a great story that hasn’t gotten nearly enough attention in the press.”