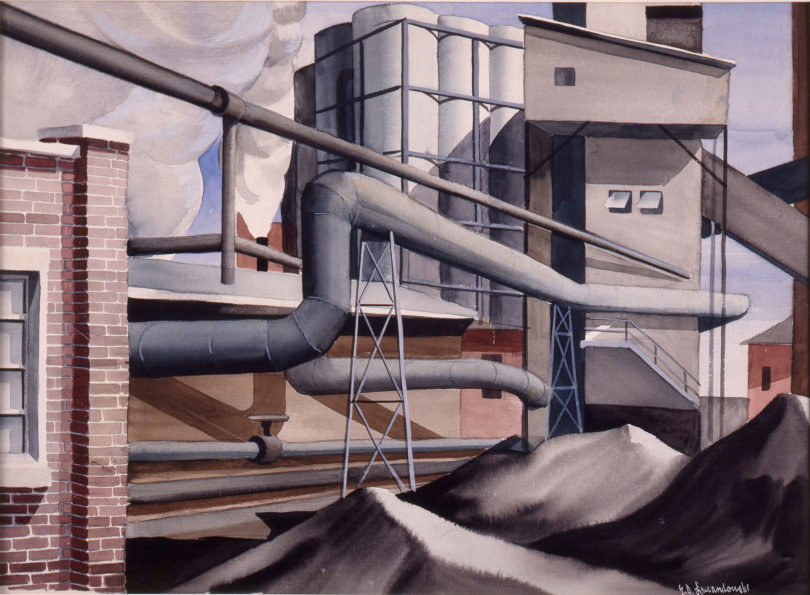 The exhibition Edmund Lewandowski: Precisionism and Beyond runs through Dec. 4 at the Georgia Museum of Art. Organized by the Flint Institute of Arts in Michigan, this retrospective is the first ever of the artist’s work. It examines all aspects of Lewandowski’s oeuvre, which investigated an array of subjects in varied styles and media.

Lewandowski (1914-1998) identified himself with the precisionism movement that emerged in the U.S. and reached its peak after World War I. Known for its precise, sharply defined geometrical shapes, precisionism combined cubism and realism and addressed themes, including American industrialization and modernization.

“Our machines are as representative of our culture as temples and sculpture were of the Greeks,” Lewandowski once said. “They are classically beautiful and represent physically the material progress that the nation has made.”

Lewandowski also was an experimental artist. The exhibition showcases his range, from representational to nonobjective, in his interpretations of subject matter. On display will be Dynamo, an oil on canvas that combines the strong geometric lines of precisionism with the abstractions reminiscent of cubism. Also in the galleries will be more literal works, such as Rock Hill Textile Plant and Milwaukee Brewery.

“Rather than present reality, I try to treat these observations with personal honesty and distill these impressions to visual order,” Lewandowski has said about his work.

In addition to industrial-themed imagery, this exhibition also showcases Lewandowski’s more vernacular scenes and marine themes. Marina II shows a distinct interest in nautical life, gained from his childhood days on the shores of Lake Michigan.

This exhibition is a showcase of Lewandowski’s work and its critical reception during his lifetime. Although Lewandowski identified himself with precisionism, his work went back and forth between styles throughout his life. His deep interest in industrial imagery was due to an “overwhelming desire through the years” to record “the beauty of man-made objects and [the] energy of American Industry.” This exhibition will not only display his works, but also his career as a whole and his impact as a painter and educator.