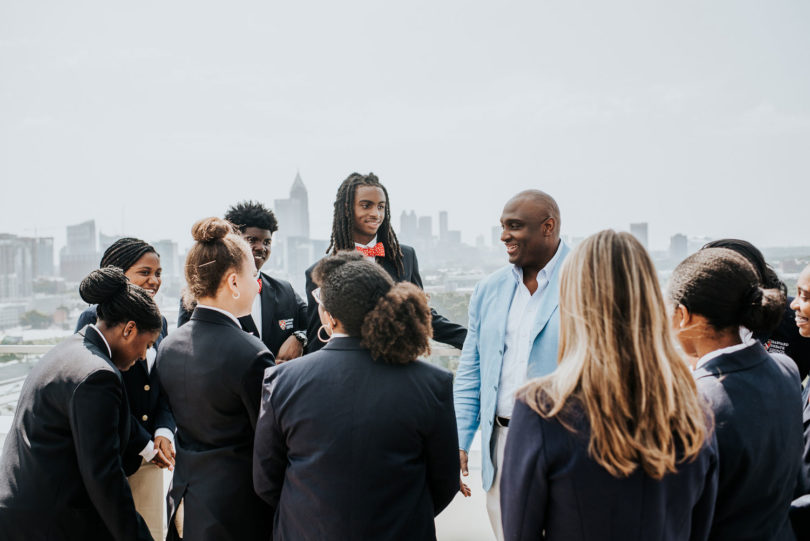 Rodney Bullard MBA '12 speaks with Atlanta high school students who participated in a Harvard debate tournament as part of the Harvard Debate Council Diversity Project. Bullard serves as the VP of Community Affairs at the Chick-fil-A Foundation which gives scholarships to program participants.

After earning a degree from the Air Force Academy, where he also played football, he received a law degree from Duke University and then an MBA at the Terry College of Business. He also completed the Harvard Business School’s advanced management program. He was selected as a White House Fellow and placed at NASA working directly for the NASA administrator. Bullard also served at the Pentagon as a congressional legislative liaison in the Office of the Secretary of the Air Force.

And he did all of that before helping create the Chick-fil-A Foundation. 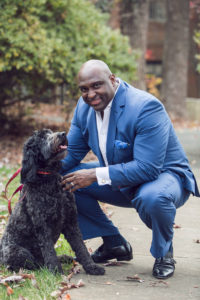 But what’s really impressive isn’t Bullard’s long list of accolades;  it’s his attitude. For Bullard MBA ’12, none of these accomplishments are about himself. They are about the people he helps along the way.

This mindset traces its beginnings to a childhood conversation with a family friend, Benjamin Mays, then-president of Morehouse College and a mentor to Martin Luther King Jr. during the civil rights leader’s student days. When Bullard was 6 or 7 years old, Mays told him, “You should get as much education and experience as you can, but you have to understand that the education and experience is not for you. It’s so you can give back to others.”

With that advice in mind, Bullard has spent his life giving back.

Bullard was hired by Chick-fil-A in 2011 to serve as the vice president of community affairs and to help create the Chick-fil-A Foundation, the philanthropic arm of the company. Under Bullard’s leadership, the foundation has grown to provide innovative programming, camps, scholarships, and educational opportunities for thousands of kids across the country.

“I had every hope and aspiration when starting the foundation but no idea it would be this big,” Bullard says.

Foundation programs serve youth of all ages, starting early with literacy programs and continuing through middle and high school, with focuses like leadership development. There are also opportunities for college students with the foundation’s new fellows program.

To continue the theme of helping others, Bullard decided to put pen to paper with his first book, Heroes Wanted: Why the World Needs You to Live Your Heart Out, published earlier this year.

“I wanted to write a book to encourage each of us to become each other’s heroes,” he says. “I’ve seen what it looks like when communities don’t have heroes, when children don’t have someone invested in them and when they do.”

An avid Bulldog fan, Bullard comes from a long line of UGA graduates, including his father, who earned a degree from the Grady College of Journalism and Mass Communication, and his mother, who graduated from the College of Education. His dedication to leadership started at home.

“My parents really instilled in me that leadership is about giving back and helping others,” Bullard says. “This idea that service is at the core of leadership and that leadership is my responsibility and my role really has been, I think, the thread throughout my career.”