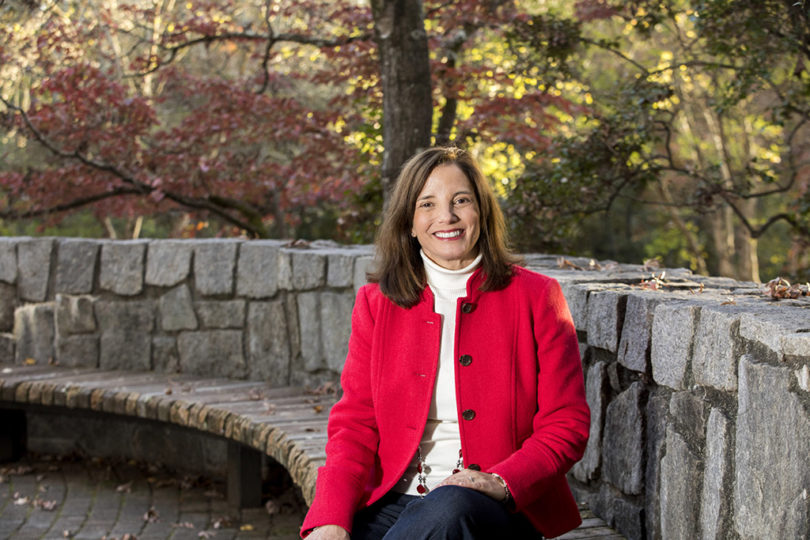 Rebecca Caravati’s position as chief operating officer and chief financial officer for the UGA Foundation has allowed her to return to her roots.

Caravati started working at UGA on July 1, 2017. She’s always been a fan of the Dawgs, and she took classes at UGA.

“Moving to Athens and going to the football games and just being part of UGA was really a dream come true,” she said. 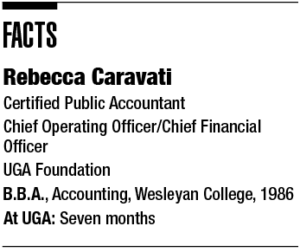 She has worked in finance and administration for more than 30 years. She started by working for Arthur Andersen, a large international CPA firm. After working for two clients,
she decided she wanted to work in academia and its more family-oriented environment. She worked at Georgia Tech for 23 years before coming to UGA.

“I appreciate and take very seriously the fiduciary care placed upon me and the UGA Foundation team to manage our budgets in accordance with our donors’ intent and all applicable laws, regulations, policies and procedures,” Caravati said.

The Foundation seeks to enrich the quality of education provided at the university through scholarships, professorships, endowed chairs and other programs. In her position, Caravati oversees the Foundation’s nearly $178 million annual budget. The majority of the Foundation’s budget is managed and spent in accordance with the donors’ intent as governed by fund agreements that are executed by both the Foundation and the donor. Discretionary budgets that are not governed by funds agreements are presented in an annual budget proposal to the Board of Trustees. Once the trustees approve, the Foundation manages expenditures in accordance with the approved budget.

“I especially enjoy managing budgets that directly support students,” Caravati said. “Providing support for the needs-based Georgia Commitment Scholarship, which was announced by the president in his January 2017 State of the University address, was a major factor in my decision to leave my previous position and accept a job here at the UGA Foundation.”

Caravati grew up in Meriwether County on a farm. As a child, she was active in 4-H.

“I actually showed steers in Stegeman Coliseum,” Caravati said. “Where the new training facility is—that was a huge barn, and then they put sawdust on the floor, and we showed our steers in the Coliseum. Then, I also judged cattle and pigs. I thought that the UGA Hotel was just the fanciest place. ”

She worked at the state 4-H office when she lived in Athens over the summer with her sisters. Moving back to Athens has allowed her to reunite with her friends from 4-H. She hopes to re-engage with 4-H and help mentor in the performing arts program.

One of Caravati’s hobbies is traveling  to places with natural beauty or history, and she loves visiting new places.

“Everywhere is great, and it’s all unique,” she said. “There are certain things I like about each one: the animals in South Africa, the history and food in Italy, the natural beauty in Switzerland.”

She also enjoys singing and has recorded a Christmas album. At the time, she was taking voice lessons, and she worked with the voice teacher to create a selection of Christmas carols. The album was a Christmas present to all of her friends and family.

Being at UGA has allowed Caravati to stay in the academic environment that she enjoys and return to the activities she enjoyed growing up.