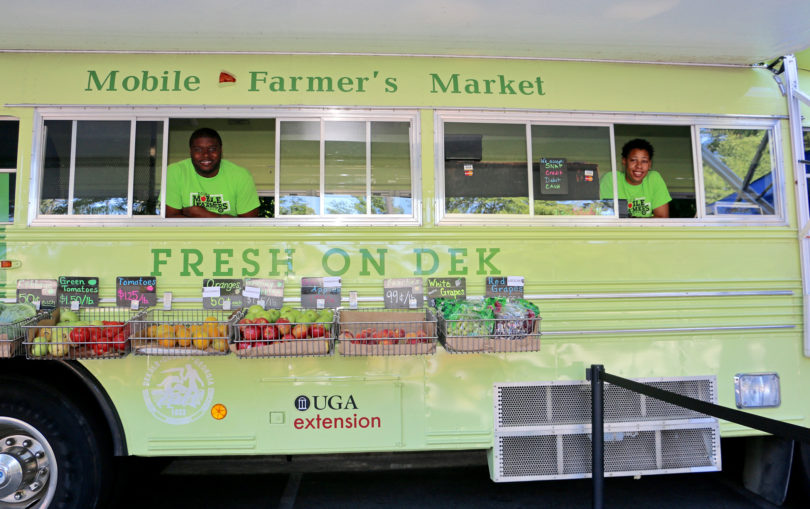 Summer isn’t quite the same without fresh corn, beans, okra and tomatoes, but many Georgians don’t have easy access to the state’s bounty of produce.

This summer, the UGA Cooperative Extension is working in DeKalb and Fulton counties to build a network of food oases to help serve residents who have a difficult time finding fresh vegetables because of limited mobility, lack of transportation or lack of well-stocked stores or markets. UGA Extension in Clayton County will launch a similar mobile market this month.

“Our mobile markets are helping to address the critical issue of food access in the Atlanta area,” said Jeff Miller, urban UGA Extension coordinator. “Working together, UGA Extension agricultural and natural resources agents, family and consumer sciences and 4-H agents teach patrons about where their food comes from, how to prepare their meals for optimal health and the value of a varied non-processed diet.

“Mobile markets in Fulton, DeKalb and Clayton counties are excellent examples of how UGA Extension is helping to meet the needs of communities across Georgia,” he also said.

For the second year, UGA Extension in DeKalb County has partnered with the DeKalb County Board of Health and the Centers for Disease Control and Prevention to bring the DeKalb Mobile Farmers Market to neighborhoods across the county.

Traveling from site to site in a converted mint green school bus, UGA Extension personnel meet with people across the county and offer them farm-fresh produce at market prices.

Last year, the mobile market served nearly 1,600 people and sold 9,800 pounds of fresh produce. The 2016 season started the week of June 6 and served 450 residents during its first 10-stop circuit. The market sold twice the amount of produce its first week of the 2016 season than it did during the first week of 2015.

“I think this is a great idea,” said Roger Hopkins, who met up with the mobile market at the Lou Walker Senior Center on June 9. “It keeps us from having to drive too far to the farmers market, and any time you can find fresh vegetables like this it’s a good thing.”

Hopkins, who is an active 67-year-old, sometimes doesn’t want to make the drive to his local farmers market and wants to avoid the crowds. For him the mobile market is convenient, but for some of the older members of his community, it’s a lifeline to a healthier diet, he said.

The success of last year’s market was due in large part to buy-in from community members like Hopkins and in part to cooperation between departments in DeKalb County’s governments and inside the UGA Extension office, according to Von Baker, DeKalb County Family and Consumer Sciences and EFNEP UGA Extension agent.

A team at DeKalb County Public Works’ fleet maintenance department retrofitted the mobile market bus, a hand-me-down prisoner transport bus from the DeKalb County Sheriff’s Office. A bus driver for the county’s Department of Recreation, Parks and Cultural Affairs drives the bus, and the DeKalb County Board of Health helps get the word out.

The market will run 16 weeks through the summer.