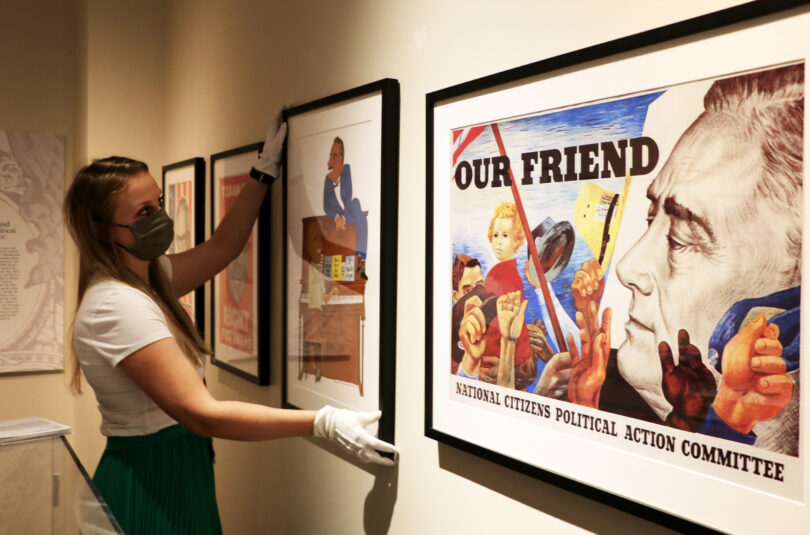 Kaylynn Washnock Stooksbury, outreach archivist for the Richard B. Russell Library for Political Research and Studies, installs a traveling exhibition at the Special Collections Building that explores the intersection of art and politics through historical campaign posters dating back 170 years. (Photo by Camie Williams)

Visitors to the University of Georgia’s Special Collections Libraries Building can explore American political campaign history through a unique traveling exhibition of posters on display this fall at the Richard B. Russell Library for Political Research and Studies.

Sign of the Times: The Great American Political Poster 1844–2012, which opens Sept. 1, is the first new exhibition to be displayed at the Special Collections Building since it reopened in August. To explore the galleries during the COVID-19 pandemic, visitors should check their symptoms through the online DawgCheck tool at dawgcheck.uga.edu prior to arriving on UGA’s campus. Patrons are required to wear face coverings and observe social distancing practices in the galleries, which are open free to the public from 8 a.m. to 5 p.m. weekdays and 1 p.m. to 5 p.m. on Saturdays.

The poster exhibition, on display in the Russell Library’s R. Harold Harrison Gallery, explores the intersection of art and politics and showcases a variety of styles, design trends and printing technology. The exhibition features some of the most recognizable political posters as well as some rarely seen from the past 170 years.

“American political posters convey the story of an election and provide us with insights into the political and cultural trends of the time. This rich, but often overlooked, art form is historically significant, and by hosting this exhibit, we hope to highlight the posters’ role as both art and politics,” said Sheryl Vogt, director of the Russell Library, one of three special collections units of UGA Libraries. “We invite people to explore this visual timeline of nearly two centuries of political history in the United States.”

The political campaign poster dates back to the 1840s when an improved lithographic printing process, which had developed in Germany, became more practical and affordable. Hand-colored portraits of presidential and vice-presidential candidates were first printed for the 1844 race between Whig Party candidate Henry Clay and the eventual winner, Democrat James K. Polk. Technological innovations in the 1880s ushered in the golden age of lithography, which produced some of the most intricate and colorful posters in the exhibition.

An array of posters produced by the Franklin Roosevelt administration during World War II will be on display, including several historic Democratic Party campaign posters designed by famous artists like Ben Shahn and James Montgomery Flagg. The exhibition also includes posters for the Eisenhower, Kennedy and Goldwater campaigns that featured a design element known as the “floating head,” which was popular at the time.

The Civil Rights Movement, anti-war protests and the counterculture trend that began in the 1960s influenced a number of the campaign posters on display, including limited-edition posters created by renowned artists such as Andy Warhol and Alexander Calder to help fund Sen. George McGovern’s 1972 presidential campaign.

Sign of the Times was curated by Hal Wert, collector and professor of history at Kansas City Art Institute, and organized by Exhibits USA/Mid-America Arts Alliance. For more about ExhibitsUSA, email MoreArt@maaa.org or visit www.eusa.org. Additional information about M-AAA is available at www.maaa.org. Exhibits USA is a national division of Mid-America Arts Alliance and The National Endowment for the Arts.

Sign of the Times will be on display from Sept. 1 through Oct. 5. A virtual tour to showcase the exhibition will be hosted on the Richard B. Russell Building Special Collections Library Facebook page at 2 p.m. Sept. 29. Updates will be posted on this event page. For more information, contact Kaylynn Washnock Stooksbury at washnock@uga.edu or 706-542-5788.