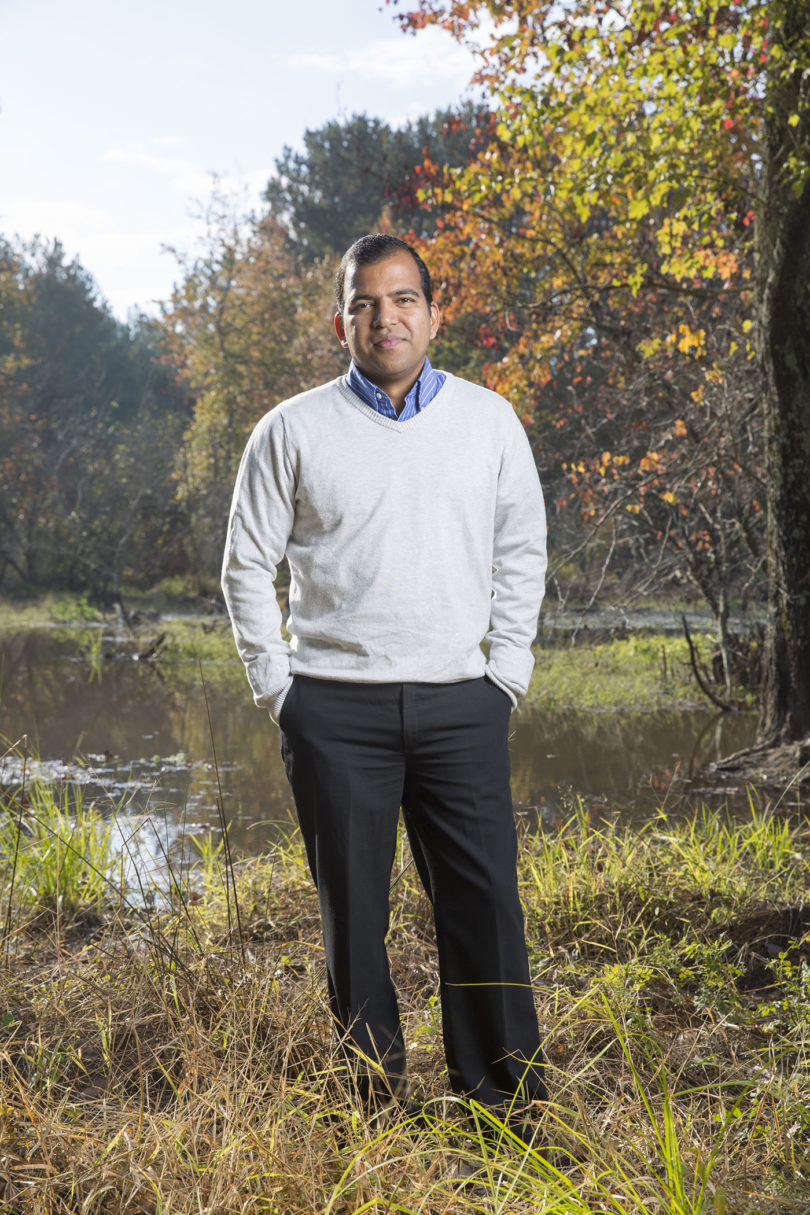 Athens, Ga. – Coastal salt marshes are among the most valuable ecosystems in the world, efficient natural mechanisms for carbon sequestration that produce biomass above and below the ground as they soak up carbon dioxide from the atmosphere. And while their gain and loss as protection from storm surge is well documented, their capacity for carbon capture is an unknown.

Now, a University of Georgia researcher, with support from NASA, has developed instrumentation and technology to use satellites to model carbon capture in vast swaths of wetlands. The new tools will be tested in coastal marshes along the Gulf of Mexico beginning this fall.

Deepak Mishra, associate professor in the Franklin College of Arts and Sciences department of geography, is principal investigator on the new prototype demonstration study that will use NASA’s MODIS—Moderate Resolution Imaging Spectroradiometer—Earth Observatory satellite to gather data to model the marshes.

“There is high demand to understand wetlands, and it’s not just about land lost, land gained, marsh lost or restored-people want to know more about these marshes,” Mishra said. “How they are performing in terms of their productivity, their resiliency, do they produce enough underground biomass to be stable? We hope to be able to answer these questions.

“The idea is to see what kind of carbon loss to the atmosphere is happening by means of satellite-derived proxies as we lose wetlands, not only in terms of area but also productivity.”

Restoration projects along coastal areas are expensive, and their success is judged primarily by the amount of vegetation gained. This new modeling capability will allow for more complete assessments of the marshes’ overall productivity: carbon capture, light-use efficiency for photosynthesis and biomass production. It also will differentiate which species of marsh grass provides better productivity.

“Right now, monitoring wetlands via satellite is problematic because of the way water and soil moisture interferes with the signal,” Mishra said. “It can be difficult to effectively separate the water contribution from the vegetative contribution.”

Mishra’s new method establishes a tide invariant model, one not affected by water in the marsh as it is monitored via satellite. Instead, the new model will isolate the vegetation signal and validate output for the location based on instrumentation on the ground.

Mishra will position two flux towers at locations along the Gulf Coast, one near Pascagoula, Mississippi, and another at the Louisiana Universities Marine Consortium site at Cocodrie, Louisiana, for one year. The prototype demonstration will use the biophysical models developed by Mishra on a previous NASA project using the MODIS sensor. The models will help predict parameters that will estimate gross primary productivity in the marshes.

“We can model canopy chlorophyll content of the marsh and measure biomass from satellites,” he said. “These two, plus the overall leaf area, which relates to photosynthetic activity, will allow us to proxy the carbon dioxide sequestration from satellite data using productivity models.”

Mishra will place the two towers in marshland locations that cover multiple MODIS pixels. A MODIS pixel is equal to an area 250 meters square, so the demonstration requires three to five pixels of homogeneous area in order for the satellite to produce accurate data on the center pixel. The MODIS sensor will pass the locations daily and also produce an eight-day composite cloud-free image, which will allow for production of a cloud-free gross primary productivity map of the Gulf Coast salt marsh every eight days.

The new trial has attracted interest from many constituencies including NASA, but also various stakeholders along the Gulf.