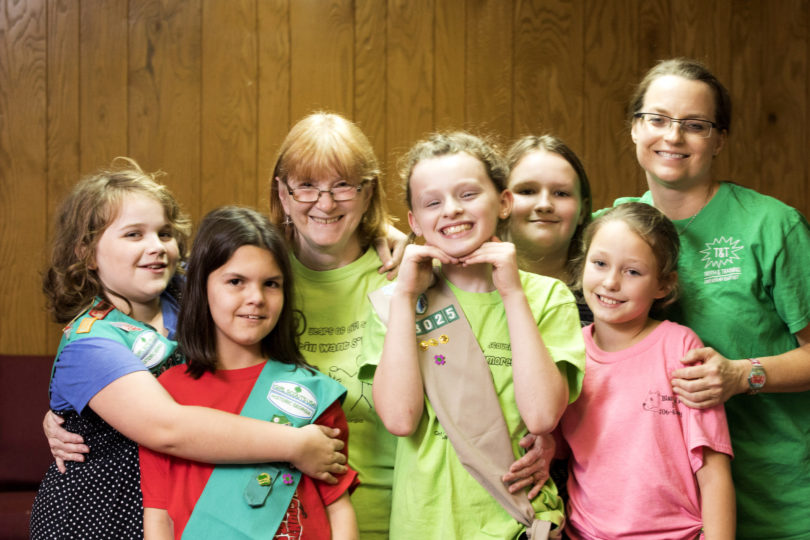 Barbara Galvond didn’t become a Girl Scout until she was a woman.

As a youngster, she wanted to join the organization but never had the opportunity. Years later, her husband, David, signed her up as a leader at the same time that he signed up their then 5-year-old daughter as a Daisy.

“He thought I could do it, and I’ve been involved ever since,” said Galvond, who is an academic advisor at UGA’s College of Education. “We laugh about that.”

Thirty-four years later, Galvond has seen her involvement with the Girl Scouts of Historic Georgia, one of the state’s two councils, come full circle.

“I actually had some girls who were in my troop when my daughter, Dava, was in [Girl Scouts] become Girl Scout leaders,” she said.

The Girl Scouts of Historic Georgia is one of more than 1,400 charities benefiting from UGA’s Campaign for Charities, which ends Dec. 15.

Troop leaders have to be approved by the Girl Scouts Council. Once they are, they go through training to learn how to work with girls of different age groups.

Galvond has worked with every age level. With her daughter’s troop, she started with the Daisies, the youngest age group, and went through to Seniors, which at the time was the highest level of Girl Scouts.

Currently, she is the leader of a troop of six Juniors and Cadettes, who are fifth-grade and sixth-grade students.

“They’re old enough to make decisions on their own,” Galvond said. “With the Juniors, you can give them a little bit more responsibility.”

As Juniors, the girls can take part in different activities. This past summer, they went camping in the Great Smoky Mountains. During the trip, they explored caverns. For some of them, it was their first time inside a cave. While there, they noticed that the creek within the cave was clear, unlike the water in a creek outside. The trip helped them understand the effects of pollution.

Some of the troop’s activities help others. In the spring, the girls made packages for people employed by the county sheriff’s department. The packages included snacks, a knock-knock joke and an inspirational quote. There are two K-9 members of the department, and the girls made bags with a toy for them, too.

Founded by Juliette Gordon “Daisy” Low in 1912, Girl Scouts currently is made up of 1.8 million girls and 800,000 adults in 92 countries. The mission of the organization is to build girls of courage, confidence and character who make the world a better place.

“It’s a great program. It really and truly is,” said Galvond. “We teach them about leadership because as they get older, they do take on more and more responsibility.

“Scouting puts them in a learning environment that’s not a school environment, where if they fail, it doesn’t matter,” she also said. “It’s more fun. It helps them grow.”