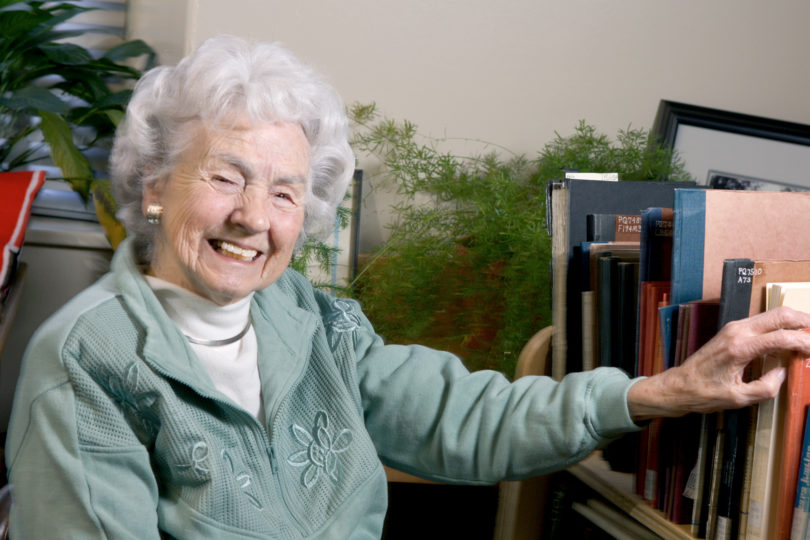 Working is a way of life for Merdelle Stepp. Anyone needing proof need only know that this spring she will mark the 41st anniversary of her employment-a second career really-at UGA Libraries.

Words like “dogged determination” and “perseverance” have been used to describe her skills in access services where her primary duty for nearly 30 years has been searching for lost books.

“She’s this department’s grandmother,” says Claire Colombo, head of access services. While the rest of the library would like to claim her as their own, “I’m not willing to let them claim that. She’s our grandmother.”

“She’s like a grandmother to all of us,” says Paul Van Wicklen, head of shelving, adding that for every special occasion, Stepp brings in goodies for students and staff alike.

Security assistants know to be on time opening the doors each morning because Stepp will be waiting on the steps when they arrive.

“I have great health. Every morning I wake up ready to get started (at 5 a.m.),” Stepp says. “Early morning is the best part of my day.”

Away from the office she stays “busy all the time.” She enjoys sewing, growing flowers and works in her church library, Beech Haven Baptist, for three hours each Sunday.

But, “the weekend is a much as I can stand. I’ve got to get back,” she says. “I love doing it or I wouldn’t still be here. I’ve just got to have a challenge.”

Not too long ago, Van Wicklen had to do the searching for lost books while Stepp was out of work.

“Paul did the searching and it just about killed him. He cannot do what she does,” says Colombo.

“I call her the Silver Streak,” Van Wicklen says. “She has ways of finding stuff no one else can. Maybe it’s built-in instinct. I hope I’m that spry when I’m her age.”

Stepp says, “I hate to be ­defeated.”

“I want to see the person who could,” Colombo says.

The greatest change during her time at the Libraries has been the conversion to electronic technology, but other than the growth, that has occurred at the university over the past 41 years, things are really much the same, according to Stepp.

“The students are extremely nice to me. If I walk out to the street with a bag or a box, they will ask if they can carry it for me and I’ve never seen them before. I always try to bring them up and not down and say encouraging things to them,” she says. “They are super. I love them all.”

The mother of two, Stepp has two granddaughters and three great-granddaughters with whom she enjoys spending time. Family pictures crowd her desk. A full private life doesn’t keep her away from the UGA Libraries.