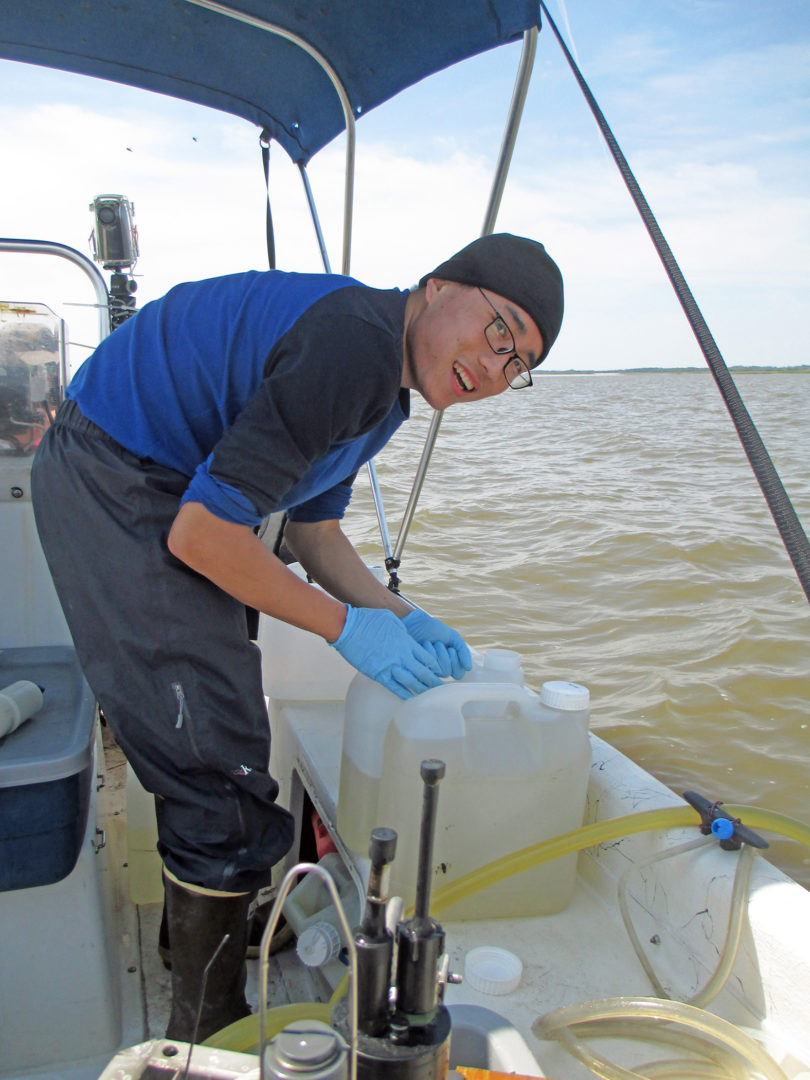 Savannah, Ga. – How much of a nutrient load is too much for Georgia’s coastal rivers and estuaries? A research team from University of Georgia Skidaway Institute of Oceanography is helping Georgia’s Environmental Protection Division answer that question. Their primary focus is on the estuary at the mouth of the Ogeechee River, where the researchers are measuring nutrient concentrations and other water properties to determine how they change as they flow through the estuary.

The nutrients are chemicals like nitrates and phosphates typically introduced into the rivers by agricultural runoff, storm water or sewage effluents and the natural decay of organic matter in the river. When present in high concentrations, the nutrients act as fertilizer, promoting excessive growth of marine plants, especially microscopic marine plants called phytoplankton.

Elsewhere on the East Coast, excessive nutrients in estuaries have been linked to toxic algal blooms that can cause fish kills or shellfish closures. Death and decay of algal blooms by bacteria can drive oxygen concentrations down to levels that are unhealthy for other marine life. These are not presently known to be significant problems in Georgia’s waters, but scientists and regulators do not know what the thresholds are for developing water quality problems.

“The Georgia EPD wants to know how much nitrogen is coming down the river and whether it has any consequences when it gets to the estuary,” said UGA Skidaway Institute scientist William Savidge. “It doesn’t really matter if you have high nutrient concentrations if it is not having a harmful effect.”

The EPD is interested in these issues because they are mandated by the Environmental Protection Agency to set limits on nutrient levels for Georgia’s estuaries. Savidge describes the mandate as a difficult problem for several reasons.

They are currently mapping the biological and chemical properties of the Ogeechee River estuary each season to assess the nutrient changes throughout the year and to see what effects can be seen in the river and the estuary.

Twice every quarter for the last year, the researchers have followed the incoming tide and sampled the river continuously as they moved upstream from the mouth of the estuary to fresh water. They used an onboard set of sensors to obtain continuous surface measurements of temperature, salinity, dissolved oxygen, chlorophyll (indicative of phytoplankton), turbidity and colored dissolved organic matter. In addition to the continuous surface measurements, the team stopped periodically and collected water samples from the bottom and throughout the water column. The product of each of these expeditions was a detailed map of conditions on the river, and when and where they are changing.

As they expected, Savidge and his team observed a wide range of conditions depending on the season. Nutrient inputs tend to be highest in the spring when agricultural fields are fertilized.

“Nutrient delivery is high in the spring, but we don’t have a high chlorophyll concentration in the Ogeechee River because, presumably, the nutrients are being washed off into the coastal ocean before any effect is noticed,” Savidge said

On the other hand, chlorophyll levels—which indicate phytoplankton population—are highest in the summer. Low summer river flow means water remains in the system longer. When combined with more sunlight and warmer temperatures, this slow flow allows more time for the microscopic plants to grow.

In addition to sampling the Ogeechee River, the team is also conducting a smaller sampling project in the Altamaha River for comparison purposes.

Field work on the project will end in June, and Savidge expects to report the team’s findings to Georgia EPD by mid-summer.