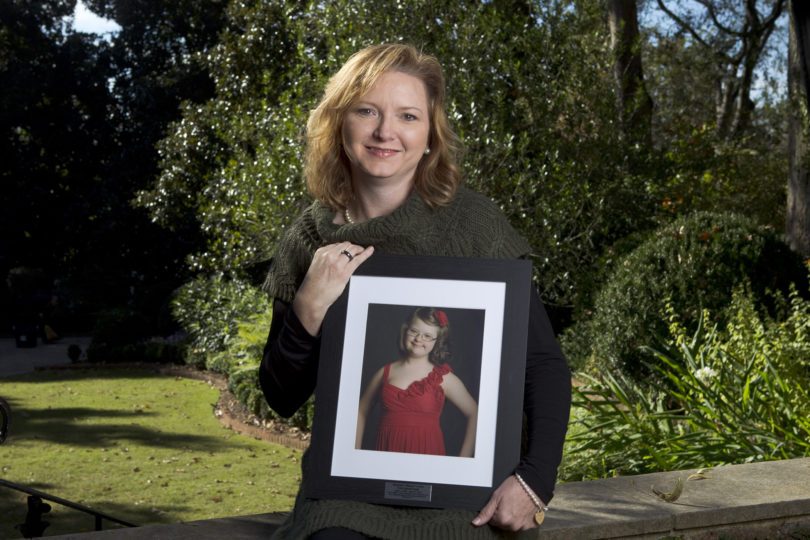 Tracy Giese holds a photo of her daughter Rebekkah

Tracy Giese, public relations coordinator for the Office of the Vice President for Instruction, had the kind of daughter who made a mother proud.

Rebekkah Curlee was a frequent Student of the Month at Elbert County Middle School, a cheerleader on her school’s squad and an outgoing classmate with many friends.

She also had Down syndrome and apraxia, a speech disorder that made it difficult for her to correctly say what she wanted. But despite the challenges those disabilities presented, Rebekkah still flourished in school and beyond.

While Rebekkah’s life was cut short, Giese said she is thankful her daughter learned how to make many friends, develop social skills and find the confidence to lead a successful, well-rounded life.

Giese credits Rebekkah’s drive to succeed in part to Extra Special People Inc., a Watkinsville-based nonprofit organization that strives to enhance the lives of children with developmental disabilities. Rebekkah was a participant at ESP for 10 years.

As part of its mission, ESP aims to empower children and their families by focusing on their abilities instead of their disabilities. ESP offers a variety of programs for children throughout the year including weekend events once a month and a summer camp.

“That participation gave Rebekkah the confidence to be involved in her school and in her community in ways she would not have had if she had not been involved in ESP,” Giese said.

ESP is one of the organizations supported by UGA’s Campaign for Charities, which ends Dec. 13.

Giese said that she knows firsthand that giving to charities such as ESP makes a difference. Rebekkah started going to ESP when she was 5. When she first attended, Giese said, her daughter was shy and overwhelmed by crowds.

But thanks to a volunteer base that serves as the backbone to the organization, Rebekkah was able to open up and begin to make new friends with her peers, Giese said.

“For us, that meant she was developing those social skills to be able to adjust to change,” Giese said.

By her teens, Giese said, Rebekkah had developed into a “social butterfly” willing to engage with people of all abilities. But it’s not just the children with special needs who benefit from ESP, Giese said.

The organization offers assistance to parents and family members who have children with special needs.

“You’re in this thing together and (our children) are there thriving off each other and making friends,” she said. “As an indirect result, the parents become friends because they have something in common.”

Giese said she didn’t realize the extent this was true until she felt the wave of support from the ESP community after Rebekkah died.

Looking back, Giese recalls how Rebekkah was a trailblazer at her school, who changed the way teachers, administrators and classmates thought about children with special needs.

“You may never know how your giving will benefit another person, but you can trust that it will. And that giving has a ripple effect, much like Bekkah’s impact in this small corner of the world,” she said.