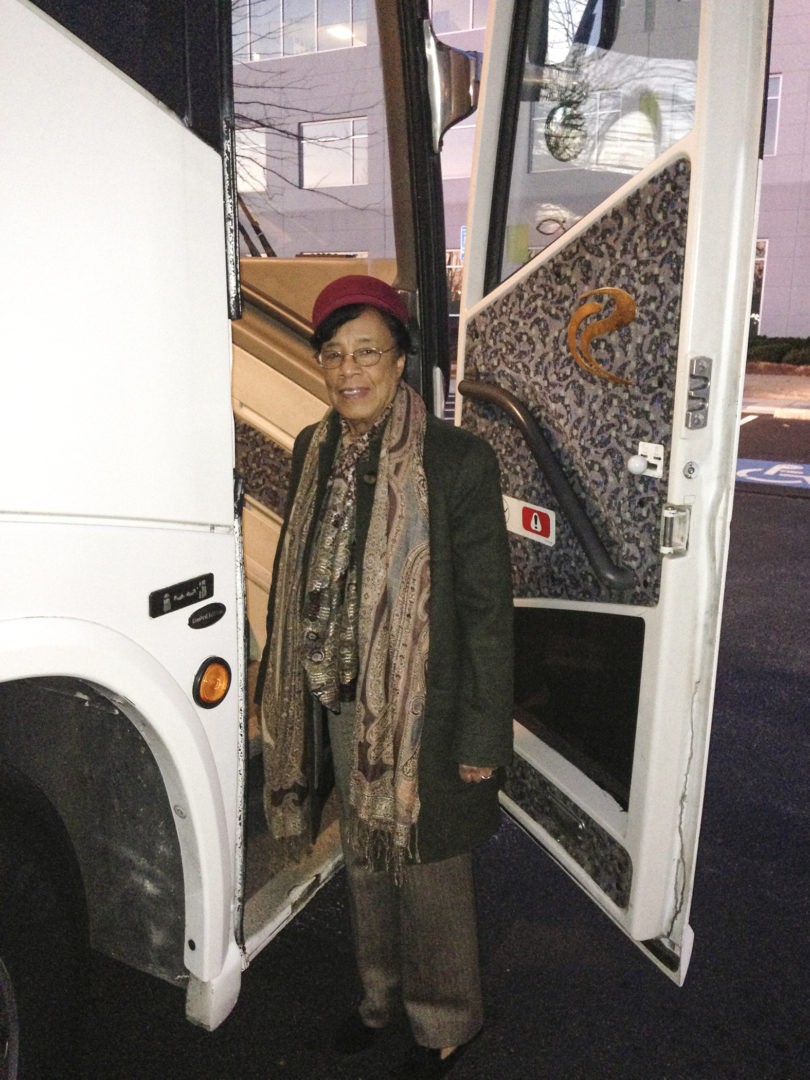 On Sunday, March 8, students and faculty from the UGA School of Social Work traveled to Selma, Alabama, to mark the anniversary of an event known today as “Bloody Sunday.”

During that event, which occurred 50 years ago this month, state troopers and police brutally attacked peaceful marchers as they attempted to cross the Edmund Pettus Bridge.

The demonstrators, mostly African-American, were on their way to the state capital of Montgomery to advocate for equal voting rights. The televised violence shocked the nation and played a critical role in the passage of the federal Voting Rights Act of 1965.

The trip occurred during National Social Work Month, whose theme this year is “Social Work Paves the Way for Change.”

June Gary Hopps, the Thomas M. “Jim” Parham Professor of Family and Children Studies, led a group of five faculty members and more than 40 students to Selma’s commemoration of the march. The trip was funded by the Office of the President, the Office of Institutional Diversity and the School of Social Work.

“Selma was a turning point for massive social change and social progress,” said Hopps, a veteran of the Atlanta lunch-counter sit-ins of the early 1960s who teaches a graduate class on social problems and public policy. “Fifty years ago we could not have made this trip with such a racially diverse group of students and faculty.”

Anna Marie Smith, a graduate student in Hopps’ class, suggested the trip. Smith, a native of Alabama, had heard about plans for the 50th anniversary to be held in her home state and thought it was a good opportunity to gain experiential learning in the area of civil rights.

“It was a way for us to witness and learn about direct action,” Smith said.

The group left Athens by chartered bus at 6:30 a.m. and picked up more students and faculty at the Gwinnett campus. They arrived in Selma in time to join thousands of people watching a memorial service broadcast from the Brown Chapel A.M.E. Church, where the original march began. Speakers included Andrew Young, the former mayor of Atlanta and a key figure of the 1965 march, as well as U.S. Attorney General Eric Holder, the Rev. Jesse Jackson and the Rev. Al Sharpton. Sharpton made a particularly strong ­impression on the group.

“He essentially said that we can’t fight for just one set of rights; we have to be for equal rights for all—meaning LGBT rights, women’s rights, immigrant rights, anyone who is disenfranchised,” said Jennifer Elkins, an assistant professor of social work.

After listening to the speakers, the group retraced the walk from the church to the Edmund Pettus Bridge with tens of ­thousands of attendees. Along the way, a variety of individuals and groups chanted, sang and carried signs and banners for various causes, or in memory of those who first marched. Despite a crowd estimated as high as 80,000, the event was remarkably peaceful. The Selma Times-Journal later reported that the Selma Police Department made only two arrests.

Hopps and other faculty members said that after the event students would conduct class discussions on the implications of the 50th anniversary and its relevance to social work and marginalized populations.

Students also would prepare a report for the president’s office about the impact of the trip on their learning and professional development.

Kace Crawford, an undergraduate from Chickamauga who plans to earn a master’s degree in social work, said that walking to the bridge was the highlight of the trip for him.

“I don’t know that much about the civil rights movement,” he said. “I think I learned a lot about voting rights and what’s going on today.”

Marissa Jones, a graduate student from Miami who wants to work in the mental health field with military families, said it was exhilarating to see large numbers of different races, religions and creeds come together.

“Seeing this made me realize that I need to do more. I think it will help me with my advocacy and really, really put my hands to the plow to advocate for those who may not have a voice,” she said.

Hopps said she wanted students to learn that developing tolerance and respect for differences is difficult, but of key importance for the professional growth of social workers.

“I hope they learn that change is not easy. It is hard, (but) social workers have skills that can help create change,” she said. “They have skills in organization, communication and negotiation—all essential for strong leadership.”

Rosalyn Denise Campbell, an assistant professor of social work, said she was thrilled to walk with her students in the footsteps of activists she’d read about, but worried about a younger generation that was unfamiliar with the overt racism of the 1960s.

“I was proud of our students because they recognized that there is still work to be done,” she said. “I think the students heard that; that they’re not there to just witness, but to pick up the torch.”

More photos of the Selma trip are at bit.ly/UGASSW-Selma2015.