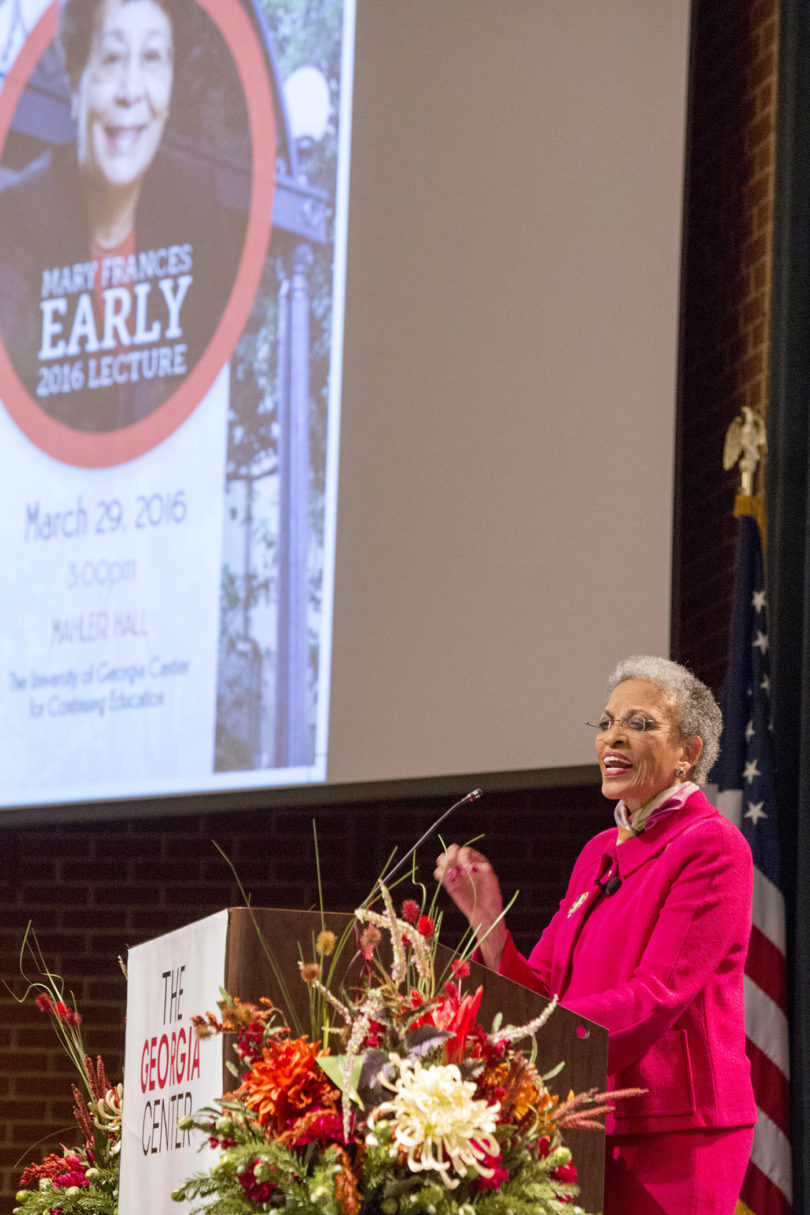 UGA and for that matter higher education across America have made huge strides toward inclusion and diversity since Mary Frances Early earned her master’s degree in 1962, becoming the first African-American to receive a UGA degree.

Johnetta B. Cole, director of the Smithsonian National Museum of African Art and the first African-American woman to serve as president of Spelman College, challenged UGA and others institutions to work even harder to promote inclusion and allow a more diverse group of voices in decision making.

“If there isn’t room enough for everyone at the table,” Cole said, “then we must figure out how to build a bigger table.”

Cole spoke at the 16th annual Mary Frances Early Lecture in Mahler Hall at the UGA Center for Continuing Education. The lecture was sponsored by the Graduate School, the Graduate and Professional Scholars and the Office of Institutional Diversity. Early was in attendance at the event.

Cole began the lecture by acknowledging that her story was not unlike Early’s. Born the same year, Cole and Early grew up in Georgia during an age of legal segregation; both started college in their mid-teens and lost fathers at an early age.

And, Cole said, “each of us found our own little way to make a contribution to the ongoing struggle for equality and human rights.”

Cole called education one of the “single, most valuable tools” for improving individual lives and society as a whole. Making higher education as diverse as our nation isn’t just the right thing to do, it also is pedagogically sound, according to Cole.

“Universities and colleges cannot do their work, they cannot prepare students for the diverse, complex and technologically on-fire world, without having diverse students, staff, faculty, boards of trustees, administrators, and curricular and extracurricular activities that reflect how our universities should be, our nation still strives to be and our world already is,” she said.

In making her case for inclusion and diversity in higher education, Cole pointed to statistics that show progress in diversity but still a large gap in areas of student retention, faculty hiring and administration makeup.

“It’s not enough to bring to college and universities students from underrepresented communities; we have to support and incentivize achievement to graduate,” she said.

Institutions of higher education also need to “look inward with honesty” at diversity in faculty and administration hiring.

To move forward, she said, universities need to invest funds and set measurable goals for improvement.

At the end of the lecture, Early was invited to the podium to offer her thoughts. Looking into the audience at the diverse faces who had come to the lecture, she closed the program with a sense of optimism.

“As you look at the signs of spring and see the beautiful colors, notice that they aren’t all the same color,” she said. “They are a variety of colors, and that’s what we are.”