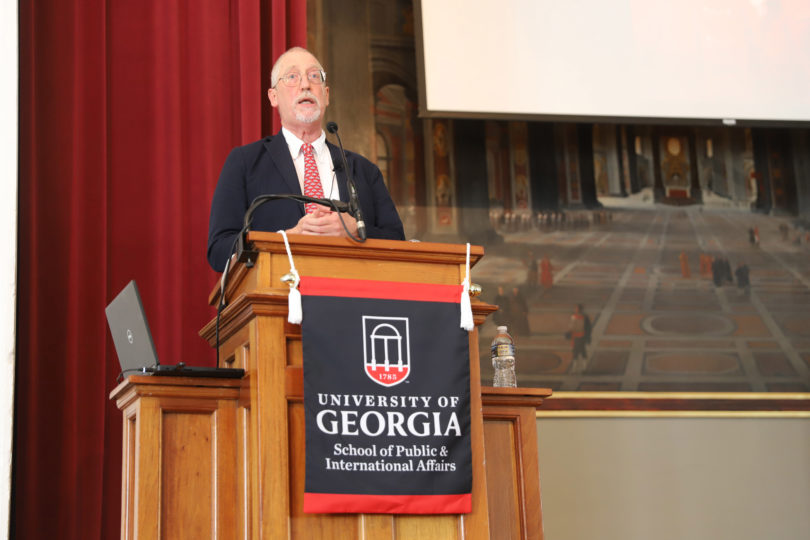 Alan Taylor, the Thomas Jefferson Professor in American History at the University of Virginia, gave the 2019 Constitution Day Lecture at UGA. (Photo courtesy of the UGA School of Public and International Affairs)

His keynote lecture, “Competing Constitutions: North America, 1783-1795,” was accompanied by a historical document exhibit hosted by the Hargrett Rare Book and Manuscript Library.  He contends that during the 1780s and 1790s, there were multiple constitutional experiments happening at the same time in North America.

“It’s not the only constitutional experiment going on, and there are alternative constitutions that are competing with that of the U.S.,” Taylor said, “And the U.S. Constitution emerges out of that competition on a larger geographic scale.”

Divisions in North America at this time were considerable. Taylor said that the “so-called 13 colonies only occupied a narrow strip of land near the coast.”  The rest of mid- to western North America was inhabited by Native Americans, the Spanish and the British Empire.

Taylor concluded that it was not commonality that united the U.S. during this time, but rather the lack of commonality that led to a need for a constitutional arrangement that would unite Western settlers and others through collective interests.

This is what led the Constitutional Congress to replace the Articles of Confederation with the U.S. Constitution. This new constitution created a more powerful executive branch and gave the federal government the right to levy taxes, among other things.